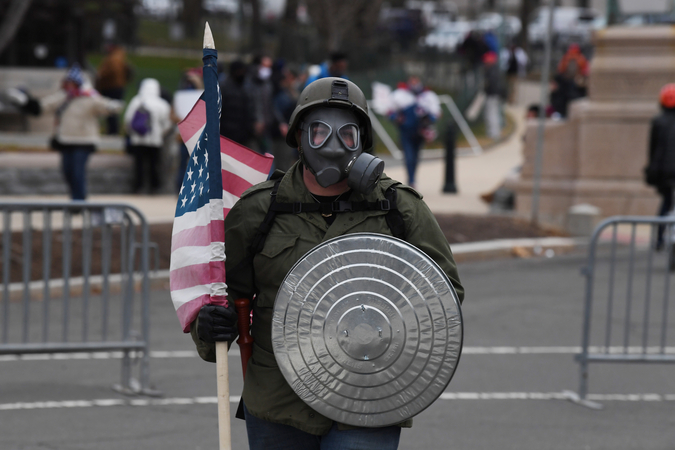 A Trump supporter outside the U.S. Capitol on Wednesday after others swarmed and invaded the building in a protest supporting the president’s claim that the Nov. 3 election was rigged against him. Washington Post photo by Matt McClain

WASHINGTON – FBI agents are trying to determine whether some who stormed the U.S. Capitol on Wednesday intended to do more than cause havoc and disrupt the certification of President-elect Joe Biden’s victory, and they are sifting through evidence to see whether anyone wanted to kill or capture lawmakers or their staffers, according to people familiar with the investigation.

Dozens have been arrested, and Friday, officials announced charges against an Arkansas man photographed in House Speaker Nancy Pelosi’s office chair with a foot on her desk. But investigators also are working to determine the motivations and larger goals, if any, of those who had weapons or other gear suggesting they planned to do physical harm.

Some rioters, for instance, were photographed carrying zip ties, a plastic version of handcuffs, and one man was arrested allegedly carrying a pistol on the Capitol grounds.

“We’re not looking at this as a grand conspiracy, but we are interested in learning what people would do with things like zip ties,” said a law enforcement official, who, like others, spoke on the condition of anonymity to discuss the investigation.

No photos or videos that have surfaced so far suggest any of the individuals with zip ties tried to take hostages. One possibility being pursued by investigators is that some who burst into the building may be current or former law enforcement officers, or current and former military personnel, people familiar with the investigation said.

Some who participated in the larger pro-Trump protest this week do work in law enforcement.

Chris West, the sheriff of Canadian County in Oklahoma, for example, held a news conference Friday to dispute that he was the person pictured on social media who claimed he was inside the Capitol, according to a Fox affiliate there. West told reporters that though he did come to rally in the District of Columbia as an “individual” and Donald Trump supporter, he never set foot in the Capitol building and thought he was walking from Liberty Square in the direction of the Capitol when the violence began.

A sheriff in Bexar County, Texas, meanwhile, told reporters that one of his lieutenants – Roxanne Mathai – was under investigation after her Facebook posts appeared to show she was at the Capitol, according to a local ABC station. Mathai has not been charged with any wrongdoing.

Many of the initial charges have been for unlawful entry, but authorities also found suspected pipe bombs outside the headquarters of the Democratic National Committee and the Republican National Committee, and they arrested the owner of a truck they said was spotted nearby with 11 molotov cocktails inside. The FBI is still searching for the person who left the suspected pipe bombs.

Adding to the investigation’s urgency, Twitter on Friday noted that plans for future armed protests have begun circulating online, including a proposed second attack on the U.S. Capitol and assaults on other state government buildings Jan. 17. Officials cautioned that there may be a variety of motives among those who broke into Congress, and they said that a key part of their investigation is determining whether any individuals or groups had planned in advance or were coordinating in the moment to commit violence against individual politicians. Others may simply have been caught up in the moment and committed rash, unplanned crimes, officials said.

Fresh in investigators minds is the group of men charged last year in Michigan – self-styled militia members – who are accused of plotting to kidnap that state’s governor and allegedly discussed storming their state capitol and taking lawmakers hostage. That case, however, was investigated surreptitiously for months during the planning stages, and the men were arrested before they carried out any abduction or attack. They have pleaded not guilty and are awaiting trial. Now, the FBI is tasked with trying to discern the motives of people who have already stormed the halls of Congress.

Justice Department and FBI officials insisted Friday that they are throwing every available resource at the case, which involves hundreds of potential suspects, though the initial focus is on a smaller number of individuals who burst into the seat of the national legislature, interrupting a joint session of Congress, leaving lawmakers and staffers cowering in fear.

The attack on Congress, in which Capitol police were quickly overrun, has shaken officials throughout the federal government, and the FBI has agents in all 56 field offices nationwide pursuing leads.

“Just because you’ve left the D.C. region, you can still expect a knock on the door if we find out you were part of criminal activity in the Capitol,” said Steven D’Antuono, head of the FBI’s Washington Field Office.

Former law enforcement officials said investigators would spend the coming days and weeks combing through social media, searching the phones and email accounts of suspects and taking other steps to determine whether the attack was coordinated. There are numerous social media posts indicating that people had talked in advance about storming the building.

Rosenberg said it will take time for investigators to determine whether there were broader conspiracies. “Even though people act in concert, it doesn’t necessarily mean they conspired,” he said. “You could have 300 people with 100 separate conspiratorial agreements of three people each, or you could have a single conspiracy with 300.”

One person was fatally shot by Capitol police during the violence. Three others suffered medical problems that day and died. And overnight Thursday into Friday, a Capitol police officer who collapsed shortly after confronting the invading crowd died of unspecified injuries.

Acting attorney general Jeffrey Rosen extended condolences to the Capitol Police and the family of Officer Brian Sicknick, who died of injuries sustained during the rioting, saying, “The Department of Justice will spare no resources in investigating and holding accountable those responsible.”

David Laufman, a former federal prosecutor who was a senior Justice Department official during the 9/11 terrorist attacks, said Wednesday’s mayhem was uniquely scarring for the country.

“This is the greatest threat to our national security since Sept. 11, and a more dangerous, insidious threat, because unlike the attack on Sept. 11, our very democracy is now at stake,” Laufman said. “And there can be no higher priority for the Department of Justice and the FBI than to surge investigative efforts to hold accountable everyone who was responsible for the attack on the U.S. Capitol, including any individuals who incited that attack.”

Laufman said that it was “fair to say that the intentions of every individual among the horde that invaded the Capitol like Visigoths were not uniform.”

“But it does appear, based on what’s in the public record now, that some held malignant intention to do harm to elected representatives, to the physical embodiment of our democracy, to derail the formalization of President-elect Biden’s election,” he said. “And it will take investigative work to parse out who was responsible for what and who held what intentions.”

Officials announced Friday that a recently elected state lawmaker from West Virginia, Derrick Evans, was charged with unlawfully entering restricted grounds after allegedly live-streaming a video of himself on his Facebook page.

A lawyer for Evans, John Bryan, has maintained that Evans is innocent, that he was not part of the violent mob that damaged the Capitol Building and that he had been exercising his First Amendment rights.

Prosecutors also announced that Lonnie Leroy Coffman, 70, of Falkville, Ala., was charged Thursday on one federal and one local count of possessing an unregistered or unlicensed firearm, and was the registered owner of a red GMC pickup truck with Alabama plates parked near the Capitol in which officers allegedly found 11 molotov cocktails and an M4 carbine assault rifle.

Kohl said that though the truck was investigated because of the suspected or “perceived pipe bombs,” Coffman was not charged in connection with those possible devices but with allegedly possessing the other weapons and destructive devices in his truck or on his person.

At an initial court appearance Thursday in Washington, Coffman did not enter a plea and was ordered held pending a hearing next week. In response to a U.S. magistrate’s questions over whether he wanted a court-appointed attorney, Coffman said he had earned a high school equivalency degree in the U.S. military after dropping out in the eighth grade to work on a farm.

The developments came as investigators described a sprawling inquiry that could take months. District police said they have received about 17,000 tips from the public after posting images of people of interest in the rioting. The FBI also has been inundated with leads after posting more than 40 photographs asking for assistance identifying people.

But the Justice Department also appeared to step back from remarks Thursday by Michael Sherwin, the acting U.S. attorney for the District of Columbia, who said President Trump’s own remarks before Wednesday’s riot at the U.S. Capitol could be investigated.

Asked about incendiary statements made by the president and other speakers at Trump’s rally shortly before a mob of his supporters breached security at the Capitol and wreaked havoc inside, Sherwin said: “Yes, we are looking at all actors here, not only the people that went into the building, but . . . were there others that maybe assisted or facilitated or played some ancillary role in this. We will look at every actor and all criminal charges.”

On Friday, asked about the possibility that Trump or other onstage speakers could face charges of inciting violence, Kohl clarified, “We don’t expect any charges of that nature.”

Afterward, Justice Department spokesman Marc Raimondi elaborated, “Our focus is on the events at the Capitol. As of now, we have not charged anyone with incitement or insurrection. This is an extremely complex and ongoing investigation, and we will continue to follow the facts and the law.”