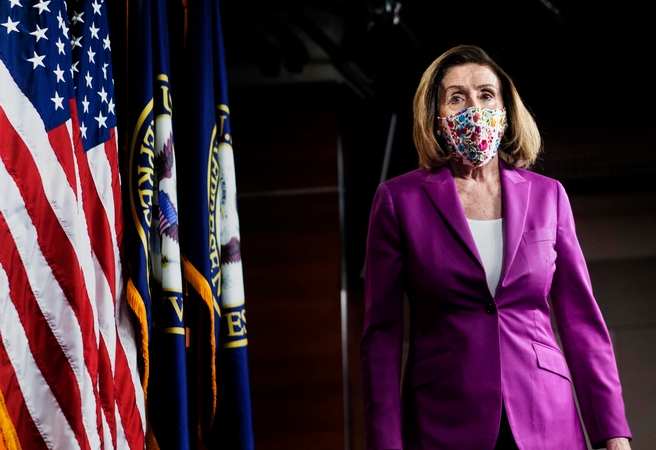 The day after hundreds of rioters stormed the U.S. Capitol, House Speaker Nancy Pelosi (D-Md.) said that Vice President Pence should invoke the 25th Amendment to remove President Trump from office or she will begin impeachment proceedings against the president. She is seen during a Jan. 7 news conference on Capitol Hill in Washington. MUST CREDIT: Washington Post photo by Melina Mara

WASHINGTON – A growing corps of House Democrats, furious over the invasion of the Capitol on Wednesday by a mob inspired and encouraged by President Donald Trump, is pushing to rapidly impeach the president a second time – hoping to force Trump from office even a few days early rather than allow him to leave on his own terms.

Removing Trump by constitutional means is a tall order for the 12 days remaining in his presidency, and House Speaker Nancy Pelosi, D-Calif., has not made a formal determination to move forward with a second impeachment, even as she consulted Friday with the chairman of the Joint Chiefs of Staff about curbing Trump’s ability to launch nuclear weapons.

“With great respect, our deliberations will continue,” Pelosi said in a statement Friday evening that laid out several options including impeachment. She expressed hope that Trump would “immediately resign” instead.

President-elect Joe Biden declined to say Friday whether he supported Trump’s impeachment, giving space for the effort in the House to proceed: “I’m focused on the virus, on the vaccine and economic growth. What the Congress decides to do is for them to decide.”

Outrage over Wednesday’s events grew to a fever pitch Friday, making it difficult for Pelosi to ignore. But rushing into an impeachment proceeding could have serious ramifications for the opening weeks of the Biden administration – prompting a Senate trial that could prevent Cabinet nominees from being confirmed for weeks.

That is the point being subtly made in a fresh memo from Senate Majority Leader Mitch McConnell, R-Ky., who sent a document to GOP senators that outlines how a potential Senate trial would work for Trump – proceedings that would all but certainly occur after he leaves the White House.

In the memo, obtained by The Washington Post, McConnell’s office notes that the Senate will not reconvene for substantive business until Jan. 19, which means the earliest possible date that impeachment trial proceedings can begin in the Senate is the day before Biden is inaugurated.

Although the Senate will hold two pro forma sessions next week, on Jan. 12 and Jan. 15, it is barred from conducting any kind of business during those days – including “beginning to act on received articles of impeachment from the House” – without agreement from all 100 senators. With a cadre of Trump-allied senators in the Republican conference, that unanimous consent is highly unlikely.

In effect, that makes the matter of an impeachment trial an issue that will need to be taken up by incoming Senate Majority Leader Charles Schumer, D-N.Y., in the first days of the Biden presidency. McConnell and Schumer have not spoken about any impeachment proceedings, aides said.

Pelosi and Schumer spoke Friday afternoon with Biden, but an account of the call provided by the Biden transition did not mention a discussion of impeachment. Aides to Pelosi and Schumer declined to comment on the confab.

Multiple House Democratic members and aides, however, said they hoped an impeachment vote could be scheduled by early next week. Virtually all of them said it was a matter of civic obligation.

“We have a great sense of unity that we have a moral obligation to act,” said Rep. Daniel Kildee of Michigan, a Democratic deputy whip. “If we can shave any number of days of the threat this president represents off the calendar, we will have done public good, but there’s also another important aspect of this. . . . It would be a more accurate view of history if this president suffered the ultimate penalty for his crimes against his country, no matter how many days are removed from his tenure.”

Trump acknowledged Thursday that there will be a new administration Jan. 20 but has not shown any indication that he will resign before then.

Pelosi said Friday in a letter to Democratic lawmakers: “If the President does not leave office imminently and willingly, the Congress will proceed with our action.” She did not specify what that action would be.

In the letter, she also described speaking to the chairman of the Joint Chiefs of Staff, Gen. Mark Milley, “to discuss available precautions for preventing an unstable president from initiating military hostilities or accessing the launch codes and ordering a nuclear strike.” She further described Trump as “unhinged” and said lawmakers “must do everything that we can” to protect the nation from him.

The top House Republican, Rep. Kevin McCarthy of California, warned Democrats against proceeding: “Impeaching the President with just 12 days left in his term will only divide our country more,” he said in a statement, adding that he had reached out to Biden to speak about how “to lower the temperature and unite the country to solve America’s challenges.”

The White House also spoke out. “A politically motivated impeachment against a President with 12 days remaining in his term will only serve to further divide our great country,” said spokesman Judd Deere.

One key Senate Democrat also warned against proceeding with impeachment – saying that he preferred that Trump resign or be removed through the 25th Amendment, out of concern that an impeachment trial could hamstring the Biden administration.

“We have to put our government together quickly – that’s the most important thing we should do,” said Sen. Joe Manchin III, D-W.Va. “We don’t need any more political theater.”

In a three-and-a-half-hour conference call with Democratic lawmakers Friday in which the vast majority of those who spoke signaled support for impeachment, Pelosi did not tip her hand further about next steps, according to participants who spoke on the condition of anonymity to describe a private call.

But other top Democrats were more forthright about proceeding quickly with impeachment, and some lawmakers said Friday that an impeachment vote could come together as soon as Monday or Tuesday if the decision is made to move forward.

Rep. Hakeem Jeffries of New York, chairman of the House Democratic Caucus, said on the call that Trump “must be held accountable for his actions,” calling the Wednesday riot “an attack on the caucus, the Congress, the country and the Constitution that was incited and facilitated by Donald Trump.” Jeffries had called for Trump’s immediate impeachment in a tweet Thursday.

House Majority Whip James Clyburn, D-S.C., said in an MSNBC interview after the conference call Friday that “the sentiment of the caucus is moving toward impeachment: The American people have seen enough, and they are ready for us to do the job of impeaching this man.”

In a signal of the deep support for further action, more than 60 House Democrats signed a letter late Thursday asking top Democratic leaders to reconvene the House as soon as possible to “show the American people that Congress is continuing to meet its responsibilities in the face of extraordinary threats” and take action, including a possible impeachment.

“We are the only branch of government that is capable of governing this country and led by sane and competent people,” reads the letter, led by Reps. Tom Malinowski, D-N.J., Dean Phillips, D-Minn., and Debbie Wasserman Schultz, D-Fla. “Going home and staying home until the eve of President Biden’s inauguration should not be an option.”

Two draft articles of impeachment have been circulated among House Democrats that cite Trump’s incitement of the mob and his delayed decision to encourage it to disperse as high crimes and misdemeanors necessitating removal.

One four-page draft that had 131 co-sponsors as of noon Friday impeaches Trump on the grounds of “Incitement of Insurrection” and accuses him of having “gravely endangered the security of the United States and its institutions of government.”

“He threatened the integrity of the democratic system, interfered with the peaceful transition of power, and imperiled a coordinate branch of government,” it reads. “He thereby betrayed his trust as President, to the manifest injury of the people of the United States.”

Rep. Jamie Raskin, D-Md., an author of that draft, said it was “unthinkable” that Congress would treat Wednesday’s events as just “one more unfortunate faux pas by the president.”

“We just suffered the most massive, violent invasion of the U.S. Capitol in American history since the War of 1812,” he said. “He has counseled and invited an attack on the Congress of the United States itself.”

No Republican House members have indicated that they would back impeachment. One, Rep. Adam Kinzinger, R-Ill., has called on Vice President Mike Pence to invoke the 25th Amendment and remove Trump. Others have suggested that they would welcome Trump’s resignation or his removal under those circumstances.

Sen. Ben Sasse, R-Neb., told “CBS This Morning” on Friday that he would “consider” any impeachment articles forwarded by the House.

“He swore an oath to the American people to preserve, protect and defend the Constitution,” Sasse said. “He acted against that. What he did was wicked.”

While House Democrats could impeach Trump in the House on their own, removing him would require a two-thirds vote of the Senate – meaning 17 Republicans would have to join with the 50 Democrats that will be seated once Sens.-elect Jon Ossoff and Raphael Warnock are certified as the winners of last Tuesday’s Georgia runoffs.

Senate impeachment trials are governed by an intricate and lengthy set of procedures that could be difficult to waive. Trump’s first impeachment trial, which concluded in February, lasted 20 days.

Trump could still be impeached after he leaves office, most constitutional scholars say, which would have the effect of barring him from the presidency again. But there is a political barrier to proceeding with a Senate trial: the impending inauguration of Biden, and his need to rapidly confirm a Cabinet.

A lengthy impeachment trial could obstruct efforts to staff Biden’s administration and prepare to govern amid the ongoing coronavirus pandemic as well as dire circumstances abroad, including a simmering threat from Iran.

At a news conference Friday, Biden suggested those concerns were on his mind even as he chose not to dissuade lawmakers from impeaching Trump.

Were it six months from the end of Trump’s term, Biden said, “we should be moving everything to get him out of office – impeaching him again, trying to invoke the 25th Amendment, whatever it took.”

“But I am focused now on us taking control as president and vice president on the 20th and get our agenda moving as quickly as we can,” he said.

The House could have other options to take action in the coming days. Raskin has written a bill to create a commission on presidential disabilities to prepare for action under the 25th Amendment, and other House Democrats have called for censure of GOP lawmakers for inciting violence.

“We need every tool in our constitutional tool kit on the table to deal with the crisis,” Raskin said. “I believe we should work on parallel tracks to defend the government and the people of the United States.”

Pelosi on Thursday did not raise the disruption a Senate trial could cause but said that impeachment represented “the overwhelming sentiment of my caucus and the American people.”