Capitol siege was planned online. Trump supporters now planning the next one 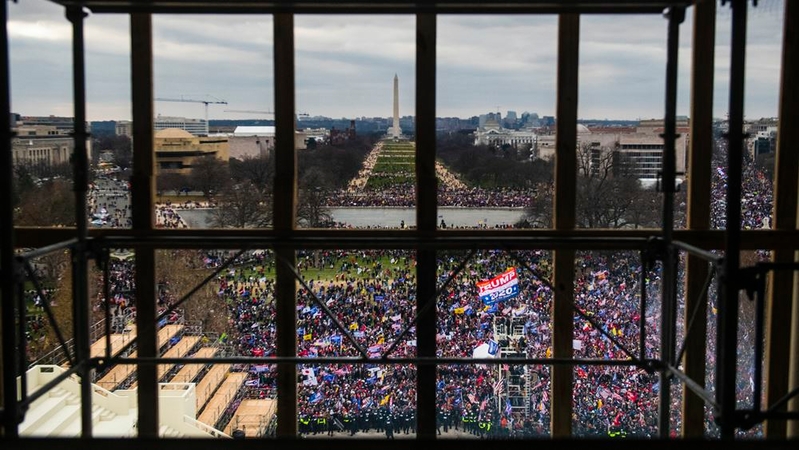 Rioters surround the Capitol on Wednesday, Jan. 6, 2021. MUST CREDIT: Photo by Amanda Voisard for The Washington Post

WASHINGTON – The planning for Wednesday’s assault on the U.S. Capitol happened largely in plain view, with chatters in far-right forums explicitly discussing how to storm the building, handcuff lawmakers with zip ties and disrupt the certification of Joe Biden’s election – in what they portrayed as responding to orders from President Donald Trump.

This went far beyond the widely reported, angry talk about thronging Washington that day. Trump supporters exchanged detailed tactical advice about what to bring and what to do once they assembled at the Capitol to conduct “citizens arrests” of members of Congress. One poster said, “[expletive] zip ties. I’m bringing rope!”

Such comments were not confined to dark corners of the Web. They were scooped up and catalogued by researchers who made their findings public weeks before a seemingly unprepared Capitol Police force was overrun by thousands of rioters, in an incident that left one officer, one protester and three other people dead.

The question left unanswered is why didn’t authorities prepare more effectively for a storm that many outsiders saw looming on the horizon – especially when those planning the assault were so open about their intentions?

“Given the very clear and explicit warning signs – with Trump supporters expressing prior intent to “storm and occupy Congress” and use “handcuffs and zip ties,” clear plans being laid out on public forums, and the recent precedent of the plot to storm the Michigan Capitol building while Congress was in session – it is truly mind-boggling that the police were not better-prepared,” said Rita Katz, executive director of SITE Intelligence Group, which was among the research groups that detailed what was coming in the weeks before the Capitol was attacked. It recapped much of this evidence in a report published Saturday.

Capitol Police spokeswoman Eva Malecki did not respond to requests for comment on Saturday.

The desire to prevent a repeat of Wednesday’s attack helped drive Twitter’s decision to suspend Trump’s account after years in which years he challenged their policies against hate speech and inciting violence. The two tweets the company cited in their announcement Friday night were tamer than many during his candidacy or his presidency, but Twitter said it was particularly concerned about contributing to a possible “secondary attack” on the U.S. Capitol and state government facilities next weekend.

Concerns about more violent incidents appear to be well founded. Calls for widespread protests on the days leading up to the inauguration of President-elect Joe Biden have been rampant online for weeks. These demonstrations are scheduled to culminate with what organizers have dubbed a “Million Militia March” on Jan. 20 as Biden and Vice President-elect Kamala Harris are to be sworn in on the same Capitol grounds that rioters overran on Wednesday.

“We all knew that tens of thousands of extremists would converge on DC Wednesday, so there’s no excuse for the resourcing failure,” said Brian Harrell, a former Trump administration Department of Homeland Security assistant secretary for infrastructure protection, now chief security officer for AVANGRID, an energy company. “Law enforcement was ill prepared for an event the entire country knew was coming, and one that [the president] has been signaling for weeks… It’s shocking.”

These renewed calls to action have bristled with violent talk and vows to bring guns to Washington in defiance of the city’s strict weapons laws. A new analysis of such posts by Alethea Group, an organization combating disinformation that draws its name from the Greek word for “truth,” found abundant evidence of threatening plans on a range of platforms large and small.

The aggressive and often hateful chatter has appeared on both mainstream sites such as Twitter and Facebook and niche, conservative sites such as TheDonald.win and Parler. The specified locations include the U.S. Capitol and the Mall in Washington, the Utah Capitol in Salt Lake City, and locations in Pittsburgh and Columbus, Ohio. Some events, including an “Armed March on All State Capitals,” include localized events in all 50 states.

“REFUSE TO BE SILENCED,” said one online post cited by Alethea Group, calling for an “ARMED MARCH ON CAPITOL HILL & ALL STATE CAPITOLS” for Jan. 17, the last Sunday of Trump’s polarizing presidency. Another post called for action at “DC & All State Capitols” and was signed by “common folk who are tired of being tread upon” declares: “We were warned!”

Parler’s chief operating officer, Jeffrey Wernick, declined to comment. An unnamed moderator for TheDonald wrote an accusatory email in response to a request for comment that used an obscenity to describe Washington Post reporters but did not respond to the substance of the query.

The bitterness and specificity of the posts cited by the Alethea Group resembles what was publicly reported ahead of Wednesday’s assault. In addition to SITE, the Coalition for a Safer Web sent numerous dispatches warning of the trouble brewing, as did Advance Democracy. Online chatter was organized, in some cases, around hashtags such as #StormTheCapitol and included threats to kill Congressional leaders.

Numerous researchers cited a Trump tweet urging supporters to come to Washington on Wednesday, the day of the presidential vote certification in Congress, that said, “Be there, will be wild!”

One poster responded on a pro-Trump forum, “He can’t exactly openly tell you to revolt . . . This is the closest he’ll ever get.” Another poster, according to the SITE report, called for storming the building to “encircle” Congress and “go after the traitors directly.” Another said, “Bring handcuffs and zip ties to DC” – things that later showed up in numerous images of the riot.

“It’s not so much that the cops weren’t aware of it. It’s almost like they were willfully ignorant of the possibility of violence.” said Marc Ginsberg, president of the coalition who personally shared his findings with government officials. “I felt like crawling into a hole after I saw what happened.”

Warnings even came from private citizens, including activists normally wary of the police. One activist, who spoke on the condition of anonymity for fear of backlash from the far-right groups, said she spent her Christmas neck-deep in far-right death threats, wading through online forums that detailed plans to smuggle guns into the District, kidnap Democrat lawmakers and violently attack District of Columbia police and racial justice activists.

What she read disturbed her so deeply that she decided to violate one of the cardinal rules of the District activist groups she has protested among since the summer: Call the police. She called the FBI’s tip line on Monday, Dec. 28 and told the woman on the other end of the phone about detailed threats and plans she had seen shared on forums including Parler, Telegram and threads on the website TheDonald. All proved to be major staging grounds for Wednesday’s attack.

“It was a very difficult decision for me to call the FBI, but who else can you tell? They’re explicitly discussing committing federal crimes – attacking the Capitol, attacking the police, attacking us,” said the activist. “I told them, ‘Look, they’re planning to kill members of Congress and they’re openly discussing bringing guns over state lines.’ I thought if that didn’t get their attention nothing would.”

The FBI did not respond to a request for comment Saturday.

Federal, state and local law enforcement have been aggressively building their intelligence capabilities since the Sept. 11, 2001, terrorist attacks caught the nation off guard. Subsequent investigation pointed to failures to shared pieces of information gathered by various agencies, prompting the creation of fusion centers and other means for transmitting intelligence in the future.

The spread of social media in recent years – and its widespread use as an organizing tool for activists – has made tracking threats that build online easier.

“There’s a big distance between having information and having a threat assessment,” said Chuck Wexler, executive director of the Police Executive Research Forum, a think tank. “The question is what they did with the intelligence they had? Did they make a proper threat assessment? If not, why not?”

Similar information is flowing freely to authorities now, as the same online forums light up with the same kind of violent chatter.

Some event listings for the days ahead of the inauguration are openly discussing delivering “justice” for Ashli Babbitt, a rioter and Air Force veteran who was fatally shot by police inside the Capitol on Wednesday.

The aggressive and often hateful chatter has appeared on both mainstream sites such as Twitter and Facebook and niche, conservative sites such as TheDonald.win and Parler.

“REFUSE TO BE SILENCED,” said one online post cited by Alethea Group, calling for an “ARMED MARCH ON CAPITOL HILL & ALL STATE CAPITOLS” for Jan. 17, the last Sunday of Trump’s polarizing presidency. Another post calling for action at “DC & All State Capitols” and signed by “common folk who are tired of being tread upon” declares: “We were warned!”

Cindy Otis, vice president of analysis at Alethea said, “So much of the conversation right now is the general making of threats. There’s a risk of these particular dates leading to violence because that’s the kind of amped-up conversation we’re already seeing from people.”