Military quick-reaction force not deployed during storming of Capitol because of a lack of planning, defense officials say 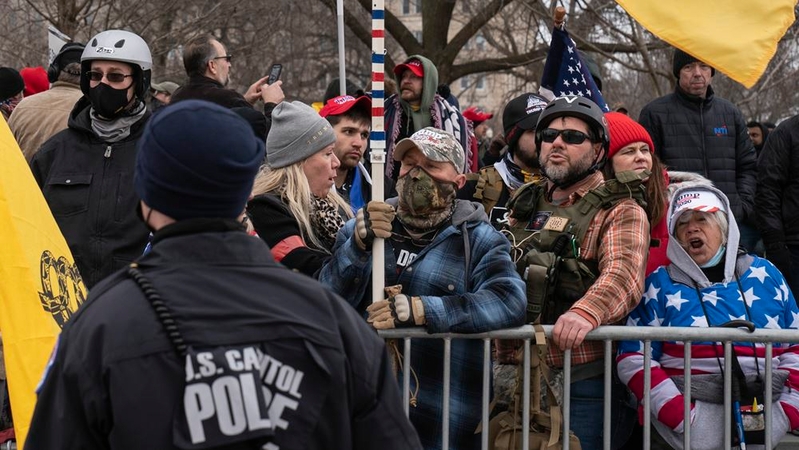 President Trump supporters stand on the east side of the U.S. Capitol on Jan. 6 before they stormed and breached the building to support the president’s false and baseless claims that he won the election. MUST CREDIT: Washington Post photo by Michael Robinson Chavez.

WASHINGTON – A small quick-reaction force assembled by the Defense Department to assist if needed during protests in Washington on Wednesday did not immediately respond when a pro-Trump mob stormed the Capitol because of a lack of planning with Capitol Police over how it might be deployed, Pentagon officials said.

The D.C. National Guard force of 40 troops is mentioned in a new timeline of events that the Pentagon released Friday night, after two days of questions about how security on Capitol Hill was so lax that the mob could storm the building and force its evacuation. Five people died in the chaos, including a Capitol Police officer.

The timeline states that the quick-reaction force was a few miles away at Joint Base Andrews in Maryland and authorized for use by acting defense secretary Christopher Miller “if additional support is requested by civil authorities.”

But a senior defense official, speaking on the condition of anonymity because of the sensitivity of the issue, said the Defense Department and Capitol Police hadn’t reached an agreement or settled on a concept ahead of time. The Pentagon had made plans with D.C. police, which oversees much of the city, including Black Lives Matter Plaza near the White House, the official said.

D.C. Democratic Mayor Muriel Bowser’s office did not respond to questions for this story.

Defense officials have said previously that with no plan in place with Capitol Police, there was concern about injecting National Guard forces into the situation abruptly. After absorbing frequent criticism about the thousands of National Guard members that Trump deployed in the city in June in response to protests spawned by the police killing of George Floyd in Minneapolis, the Pentagon sought a much narrower mission, preparing and providing only what D.C. officials specifically requested in advance.

It’s not clear how the quick-reaction force could have been used to restore order once thousands of Trump’s supporters surrounded the Capitol and as some began entering the building. National Guard members at the D.C. Armory were also not deployed until Miller determined at 3 p.m. that all available D.C. National Guard forces should be sent to reinforce D.C. and Capitol police positions, according to the timeline.

The timeline states that Miller was informed that Trump’s supporters were moving to the Capitol at 1:05 p.m. Capitol Police ordered the evacuation of the building at 1:26 p.m., as the mob stormed it.

McCarthy’s office spoke with Bowser at 1:34 p.m., the Pentagon timeline said. It states she made a request for an “unspecified number of additional forces.”

McCarthy spoke on the phone with Bowser again at 2:22 p.m., with D.C. police and other D.C. officials also on the line.

Eight minutes later, Miller, McCarthy and Gen. Mark A. Milley, the chairman of the Joint Chiefs of Staff, met to discuss the request for more forces. Miller approved the deployment of all available forces to assist both police forces at 3 p.m.

At 5:02 p.m., 154 members of the National Guard left the Armory. They arrived on Capitol Hill at 5:40 p.m. and were then sworn in to work with Capitol Police.

Defense officials have deflected criticism of their response to the crisis, stating that law enforcement authorities were in charge and confident that they had the city under control. Pro-Trump groups had openly suggested online for weeks that they might take action on Wednesday, as a protest of the president’s election loss was underway.

Additional members of the National Guard from nearby states were on the ground Thursday. It would have been nearly impossible for them to arrive more quickly, considering they were not put on notice that they might be needed, said Maj. Gen. Timothy Gowen, the top officer in the Maryland National Guard.

“We are not a first-response force,” he said. “We are not the fire or police.”