Biden still planning to be sworn in on the steps of U.S. Capitol two weeks after mob attack 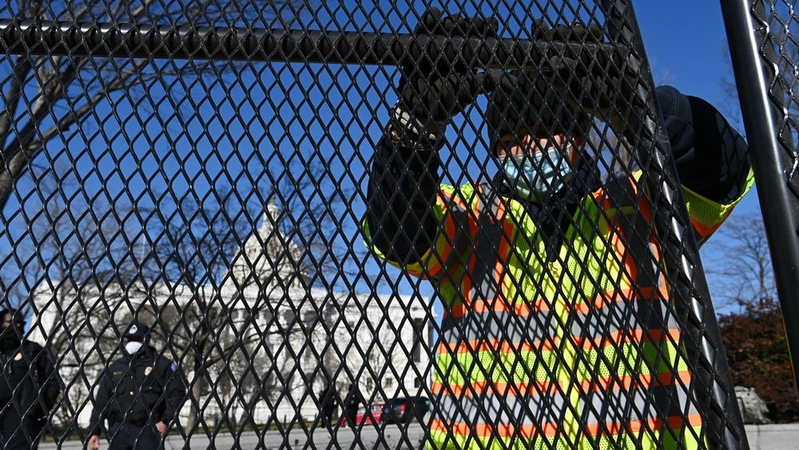 Workers put up fencing outside the U.S. Capitol on Jan. 7. MUST CREDIT: Washington Post photo by Matt McClain

Joe Biden still plans to be sworn in on the steps of the U.S. Capitol on Jan. 20, exactly two weeks after a pro-Trump mob with rioters wielding Confederate flags stormed the building to attack the very nation Biden was elected to lead.

That moment shrouded in symbolism will launch a 59th presidential inauguration set to take place under extraordinary circumstances. The event was already scaled down and subdued by the coronavirus pandemic. And now, the Biden administration has the added weight of showing strength and stability to the rest of the world, which watched in horror as American democracy wavered from the exact place where he is to take the oath of office.

While changes could still be made, as of last week Biden’s inauguration and swearing in were set to take place on the west front of the U.S. Capitol.

“We are confident in our security partners who have spent months planning and preparing for the inauguration, and we are continuing to work with them to ensure the utmost safety and security of the president-elect,” a senior Biden inauguration official said last week, speaking on the condition of anonymity to discuss security matters. “This will mark a new day for the American people focused on healing our nation, bringing our country together and building it back better.”

Following weeks of historic unrest, the Biden administration is hoping that the inauguration will draw attention toward the importance of national unity and away from President Donald Trump, who said in a tweet Friday that he would not attend the event. He would be the first president to skip his successor’s swearing-in ceremony in 152 years.

Some involved in the inauguration planning, who have been in close contact with security agencies, noted that the security footprint for the event will be much larger than it was Wednesday at the Capitol, when the mob disrupted the Senate and House of Representatives as lawmakers accepted the election results.

The inauguration is deemed a National Special Security Event (NSSE), which brings in a wide range of federal agencies and law enforcement officials that create a wide security perimeter, with road closures and barriers around the Capitol. The Secret Service, the agency responsible for designing and implementing a security operation plan for such events, released a statement Thursday night stressing its readiness for Inauguration Day.

“For well over a year, the U.S. Secret Service, along with our NSSE partners, has been working tirelessly to anticipate and prepare for all possible contingencies at every level to ensure a safe and secure Inauguration Day,” the statement said.

D.C. Mayor Muriel Bowser released a letter Sunday urging Chad Wolf, acting secretary of the Department of Homeland Security, to take “a very different approach than previous inaugurations given the chaos, injury, and death experienced at the United States Capitol during the insurrection.”

Bowser asked the department to extend the NSSE period and coordinate with other federal agencies to free up the D.C. police to focus on “its local mission.” She also called on Wolf to cancel and deny permits for all demonstrations from Monday to Jan. 24.

Officials say Joe Biden will still be sworn in as president Jan. 20 on the steps of the Capitol, where a mob stormed the building Jan. 6. MUST CREDIT: Photo for The Washington Post by Astrid Riecken

Some Trump supporters have vowed to return to the District of Columbia on Jan. 17, with one online post cited by Alethea Group calling for an “ARMED MARCH ON CAPITOL HILL & ALL STATE CAPITOLS.” Others have discussed a “Million Militia March” on Inauguration Day.

As of Friday, the Park Service had issued only two permits that together allow for 75 people for demonstrations around the Inauguration, according to Mike Litterst, a spokesman for the Park Service.

The Park Service is still processing five permit applications, which include two requests for events expecting 5,000 people. The first of those applications was submitted last January by D.C. Action, a liberal group based in D.C. The second was submitted in December by Black Pact, a nonpartisan political group organizing a march for reparations.

Litterst said he was waiting for instructions from the Presidential Inaugural Committee to “make any adjustments to our facility and our property.”

Sen. Roy Blunt, R-Mo., chairman of the Joint Congressional Committee on Inaugural Ceremonies (JCCIC), and Sen. Amy Klobuchar of Minnesota, the ranking Democrat on the Senate Rules and Administration Committee, said in a statement Thursday that the storming of the Capitol was a “sad and solemn day for our country,” but plans to swear in Biden and Vice President-elect Kamala Harris will move forward as planned.

“The outrageous attack on the Capitol, however, will not stop us from affirming to Americans – and the world – that our democracy endures,” they said in the statement.

Paige Waltz, communications director for the JCCIC, said that the committee is working with “institutional partners to conduct a thorough assessment of the inaugural platform, and the other Capitol spaces and grounds that are traditionally used for inaugural ceremonies.”

Waltz added that the committee will not make further comments about the specifics of the event until the assessment is complete.

The District has also ramped up security measures. On Wednesday, Bowser extended a public emergency order through Jan. 21, which allows her to issue curfews, close businesses, halt transit and dip into emergency funds, among other actions, to preserve public safety through the inauguration.

Military officials have erected a seven-foot fence designed to prevent scaling around the periphery of the U.S. Capitol. More than 6,000 National Guardsmen were expected to arrive in the District over the weekend to help support the D.C. police and Capitol Police, U.S. Army Secretary Ryan McCarthy said Thursday.

The focus on fortification and security may further scale down an event already limited in size by the pandemic. The Presidential Inaugural Committee (PIC) requested and received permits for Lafayette Square, portions of the National Mall from Third to 14th streets, land surrounding the Lincoln Memorial and the Martin Luther King Jr. Memorial, among others, for the inauguration. The permit requests include plans for a Biden-Harris inaugural celebration at the Martin Luther King Jr. Memorial and an event with stages and tents at the Lincoln Memorial. But even before the pro-Trump attempted insurrection at the Capitol, Biden’s inaugural team had announced that the iconic parade would be virtual and canceled all in-person balls.

In December, the JCCIC said members of Congress would receive only two tickets each, as opposed to the 130,000 they are typically instructed to distribute among their constituents, citing public health concerns.

During the 2017 inauguration, more than 95 percent of hotel rooms were filled across the District, according to a spokesperson for Destination DC, a group that promotes the city to visitors. This year, while comprehensive occupancy data is not available until after the event, there are few signs pointing to a surge in visitors to the District.

Thomas Penny, president of Donohoe Hospitality, which oversees more than 15 hotels in the region, said that reservations at his hotels remain light in late January, with the most noticeable uptick in interest since Wednesday coming from security-related agencies seeking hotel rooms. He said one security-related agency called on Thursday to book 200 rooms for the inauguration.

Emily Mooney, retail strategy manager for the DowntownDC Business Improvement District, said her team has been working closely with the city government and security agencies to communicate with local businesses about expectations for the inauguration and ensure that their landscaping is up to par for the event, no matter the number of people who travel downtown that day.

She said her district would refrain from issuing formal guidance to business owners about boarding up or closing shop unless city leadership suggests otherwise.

“We are preparing as we normally would for inauguration even though we expect a much smaller turnout,” she said. “We fully expect that downtown D.C. will be safe and secure for the inauguration.”