Republicans wonder whether Trump’s problems will be his undoing 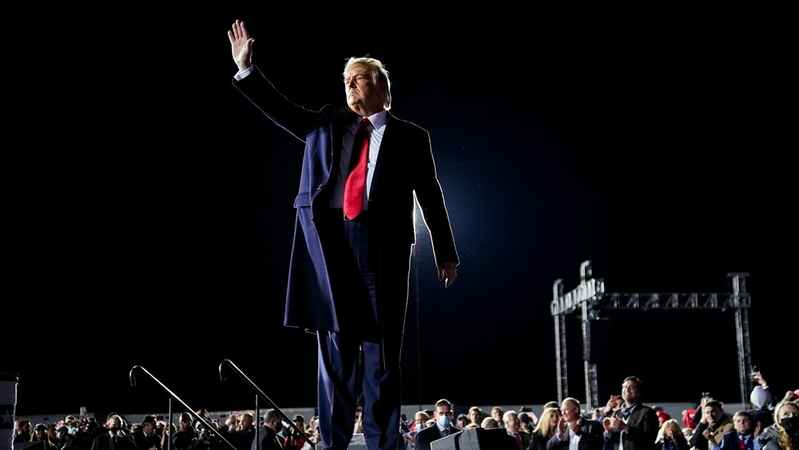 WASHINGTON – Whether President Donald Trump is forced from office or serves out the remaining days of his term, he is now destined to slink out of the White House considerably diminished from the strapping, fearsome force he and his advisers imagined he would be in his post-presidency.

In the wake of the mob attack on the Capitol that Trump incited, some allies have abandoned him, many in the business community have shunned him and Twitter took away his social media megaphone. Many Republicans also hold him responsible for losing their Senate majority with last week’s twin defeats in Georgia, not to mention their House majority two years ago.

Trump had planned to retreat from Washington to plot a comeback that could return him to the White House in four years, but now he will have to contend with a possible second impeachment or perhaps even criminal charges.

With 10 days remaining in his presidency, Trump has become the political equivalent of a balloon in the Macy’s Thanksgiving Day Parade flying high down New York’s Sixth Avenue, only to be punctured, twist in the wind and deflate as it rounds the corner to the parade’s endpoint at Herald Square.

“The way he handled himself in the last 60 days has tarnished his reputation and his ability to be a future leader – and by botching the Georgia Senate races, his entire economic agenda is about to get overturned by the Senate,” longtime Republican strategist Scott Reed said. “He’s really gone backwards like no one ever would have imagined.”

Despite Trump’s current troubles, he is sure to maintain a grass-roots following. In his statement Friday night reacting to Twitter’s extraordinary decision to permanently ban his account because the president’s messages posed a threat of future violence, Trump effectively laid claim to the 74.2 million “great American patriots” who voted for him in November.

Jason Miller, a senior political adviser to the president, said after speaking with Trump on Saturday that the president plans to spend tens of millions of dollars from his political action committee to help Republicans win back the House and Senate in 2022. He left open the possibility that Trump would run for president again in 2024.

“President Trump is still the biggest name in American politics and the president is still the leader of the Republican Party. He’ll be the most sought-after political endorsement heading into the 2022 midterms,” Miller said. He added: “You can’t censor an entire movement. This is critical to keep in mind for Beltway politicians and pundits who themselves have lost touch with Republican grass-roots activists around the country.”

Still, the new reality for Trump is messy. Frank Luntz, a veteran GOP pollster, conducted a focus group the night after the Capitol attack with 12 Trump voters from 11 different states. He said they fell into three camps: those who believe the fact that President-elect Joe Biden won the election and think it’s time Trump move on; those who think it was stolen from Trump but he still should move on; and those who think it was stolen and Trump should continue to fight.

Luntz was flabbergasted by the sharp, even angry tone of the discussion.

That spells trouble for the president, Luntz concluded. “When you’ve got a unified force, you can speak to them as their general and motivate them to change their behavior,” he added. “But when they have broken down into tribes, it’s impossible to deliver a message that reaches everybody. Trump is much less powerful today than he was 72 hours ago.”

Luntz said that when he asked the group of 12 to name their preferred candidate for president in 2024, only two said Trump. None said Vice President Mike Pence.

Wednesday’s attack was a clarifying moment for Trump backers. A handful of administration officials – including two original members of Trump’s Cabinet, Transportation Secretary Elaine Chao (who is married to Senate Majority Leader Mitch McConnell) and Education Secretary Betsy DeVos – resigned in the aftermath.

The scene Jan. 6 outside the Capitol after a mob of Trump supporters breached the building in a violent riot. MUST CREDIT: Washington Post photo by Bonnie Jo Mount

On Capitol Hill, McConnell, R-Ky., publicly broke with Trump even before the deadly siege began, warning in a speech Wednesday that “our democracy would enter a death spiral” if the losing side in an election were able to overturn a fair outcome with baseless allegations. McConnell has also told fellow senators and other confidants that he does not plan to speak with Trump again.

Others have joined in. Sen. Lisa Murkowski, R-Alaska, told the Anchorage Daily News: “I want him to resign. I want him out. He has caused enough damage.”

Sen. Lindsey Graham, R-S.C., long one of Trump’s confidants and golfing buddies, declared on the Senate floor: “Count me out. Enough is enough.”

There have been other defections, too. Consider the case of Rep. Nancy Mace, a newly elected Republican freshman from South Carolina, a state the president carried by a sizable 12 percentage points.

Mace worked as a coalitions and field staffer on Trump’s 2016 campaign, and in her congressional campaign last year she touted her work for the president. She featured a photo of him with her, Trump smiling and flashing a thumbs-up. And the president tweeted his support for her four times.

But on Thursday, when a reporter from the State asked whether she still believed in Trump, Mace did not hesitate. “No, I don’t,” she said. “I can’t condone the rhetoric from yesterday, where people died and all the violence. These were not protests. This was anarchy.”

Speaking more generally, Mace told the newspaper that the Trump-incited riot undermined all that he has accomplished as president.

“That legacy has now been wiped out,” Mace said. “It is gone, and we have to start over from scratch.”

Some Trump allies would only speak about the president’s weakened state privately. One evangelical leader, for instance, likened Wednesday’s events, coupled with the election defeats on Tuesday in Georgia, to a torpedo hitting the starboard side of a warship. But the person’s concern about being quoted by name and angering Trump was itself a testament to the president’s enduring, if somewhat diminished, political power.

“It is folly to suggest that everyone will just turn their back on him,” Buck said. “His power has always rested in the sway he has with voters. It was never because members of Congress particularly cared for him or liked him. I have seen so many times where you thought, this was the moment things would change, but folks went home, they heard from their constituents, their constituents demanded continued loyalty to Donald Trump and they came back refreshed as Trumpers once again.”

Buck argued that any kind of punishment for Trump – be it impeachment or prosecution or merely a censure by Congress – could accrue to his political benefit, a point Miller made as well.

“His whole persona is built on grievance, that he is the champion of regular people while the elites in Washington are against him,” Buck said. “I think that he would reap a lot of political benefit from the impeachment.”

Anthony Scaramucci, a former White House communications director who has since come out sharply against Trump, warned that the outgoing president is capable of a political rebirth – though at 74 years old, he argued, Trump does not have time to waste.

“Unless they put him in a position where he is no longer eligible to run for office and decapitate him politically, it is not clear to me that we’ve seen the last of Trump,” Scaramucci said.

Still, the lessons of history do not favor Trump. U.S. presidents tend to be like new cars parked in a showroom. Once they leave office, they depreciate in value immediately, followed by a steady erosion. Even if they maintain their popularity, as Barack Obama has, or recast their image, as Bill Clinton did through his charity work, they never again command the attention and power they had in office. This has proven especially, painfully true for presidents defeated in their bids for re-election, such as Gerald Ford and Jimmy Carter.

“In American politics, love turns to hatred very quickly,” presidential historian Michael Beschloss said. “How appealing is Donald Trump going to look in a month or two? Is this someone who will be beleaguered by indictments and/or lawsuits? Is this someone who is going to be struggling with financial problems? Those things may not look so appealing, even to people who love him at the moment.”

Beschloss added: “Americans have a tendency, almost in their DNA, to like and respect a president. (Richard) Nixon had a lot of popularity right down until the end, but very quickly he became the embodiment of lying, criminality and bad political ethics, and became so radioactive that he was never invited again to a Republican convention.”