Goldman, JPMorgan to delist some products in Hong Kong 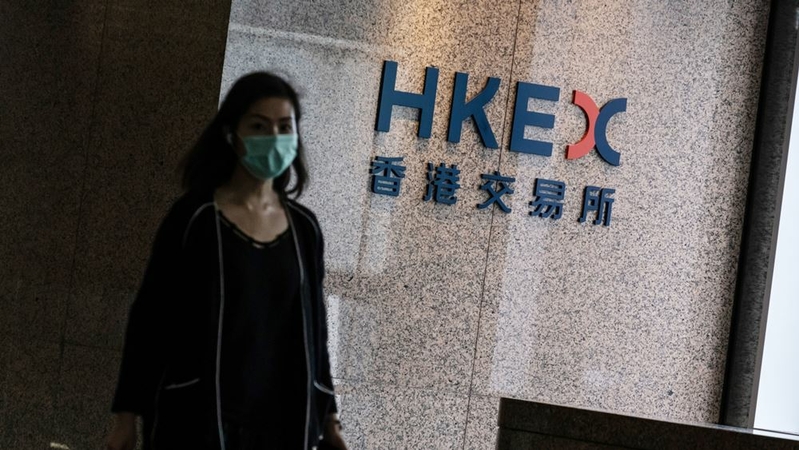 A person past signage for Hong Kong Exchanges & Clearing at the Exchange Square complex in Hong Kong on Aug. 19, 2020. MUST CREDIT: Bloomberg photo by Roy Liu.

The fallout from U.S. sanctions on Chinese military-linked companies widened as banks and money managers raced to comply with a vaguely worded executive order from Donald Trump that bans new investments starting Monday.

Goldman Sachs, Morgan Stanley and JPMorgan Chase will delist 500 structured products in Hong Kong, filings show. The city is the world’s largest market for such contracts with more than 12,000 of them, according to Hong Kong Exchanges and Clearing.

Investors have struggled to get more clarity on how regulators, exchanges and intermediaries will implement the order Trump issued in the waning days of his presidency. The New York Stock Exchange said last week it will delist China Mobile and two other Chinese telecom companies. MSCI deleted the stocks from its global benchmark indexes on Friday, triggering a rush to sell that led to record trading volume in the stocks and drove China Mobile’s share price to a 14-year low.

Trump’s order said designated stocks cannot be purchased by Americans starting on Jan. 11, and that holdings by Americans must be fully divested by November when transactions will be frozen.

For banks, index compilers and money managers, that has added to the challenges of navigating tensions between Washington and Beijing that have increasingly entered the financial sphere. China issued new rules on Saturday to protect its firms from “unjustified” foreign laws that will allow Chinese courts to punish global companies for complying with foreign restrictions.

“This will raise a big dilemma for companies,” Jingzhou Tao, an arbitrator with Arbitration Chambers, said in a Bloomberg Television interview. “On one hand you have these U.S. sanctions which you must observe, otherwise you get sanctioned by the U.S. government, on the other hand you have the Chinese government, if they say that you should not observe these sanction-related laws, then you’re in a big dilemma.”

The delisting of Hang Seng Index products, and State Street’s warning that U.S. investors should avoid the tracker fund, show how Trump’s order is impacting investment flows beyond just the handful of Chinese companies on the U.S. sanctions list.

The about 500 structured products being delisted account for less than 1% of Hong Kong’s turnover, according to Bloomberg Intelligence.

Even if banned companies comprise a small fraction of a widely followed index, the sanctions could force money managers to shift billions of dollars out of products linked to that index. It’s one reason why MSCI, FTSE Russell and S&P Dow Jones Indices have all adjusted their equity gauges to remove banned companies like China Mobile. Hang Seng Indexes said Friday that it has no plan to change its benchmarks for now, though it will monitor “market developments” closely.

Hong Kong’s exchange said it’s working closely with banks to ensure orderly delistings. “We do not believe this will have a material adverse impact on Hong Kong’s structured products market,” the exchange said in a statement Sunday. The city’s securities regulator said it has also been in close dialogue with the affected issuers and has reminded them to carefully assess the impact of the U.S. sanctions on their products.