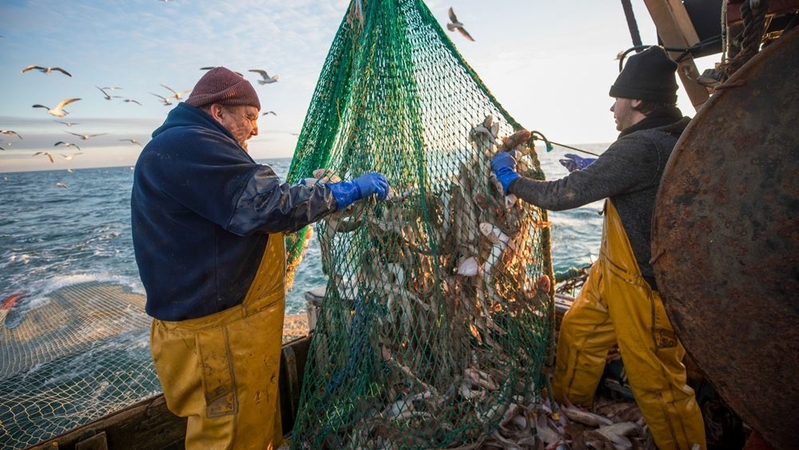 Fishermen from Newhaven sort their catch in the English Channel on Jan. 10. MUST CREDIT: Bloomberg photo by Jason Alden

While Prime Minister Boris Johnson claimed last month’s trade deal will let the U.K. regain control of its fishing waters by taking back 25% of the European Union’s rights over five years, many fishermen feel let down. They’re upset that the share fell far below original demands and may even mean smaller amounts of some key catches.

“One of the species we are most worried about is cod,” said Bruce, who has fished the waters off northeast Scotland for decades. “We were hoping to get more quota. I’m sorry to say it’s looking like we’ll have less.”

Although a tiny part of the economy, fishing was a key issue that held up trade talks and became symbolic after membership of Europe’s single market precipitated its demise. The government says the deal will let Britain catch an extra 146 million pounds ($199 million) of fish, aiding an industry that saw a big decline since the 1970s.

The accord will allow fleets to catch more mackerel and herring, but some fisherman could be left with smaller amounts of cod and haddock — favored in the U.K.’s iconic fish and chips dish.

The U.K. landed almost 1 billion pounds of fish in 2019. Johnson originally demanded an 80% cut to EU rights in British waters, before giving up ground to get an agreement done. Britain has some of Europe’s most fertile fishing areas, though has had to share them with other nations.

The accord also means quota swapping — where rights to species are swapped between boats — may no longer be possible for U.K. fleets. That means the amount of cod they can catch in the North Sea will fall to 57%, from 63.5%, the Scottish government said. Much of the mackerel and herring caught by U.K. boats gets sold to the continent.

While quota swapping between individual countries will no longer be allowed, the U.K. and EU will hold separate talks over developing a new mechanism. In response to concerns about key fishing stocks, the Department for Environment, Food and Rural Affairs said on its website the deal will allow the U.K. to prioritize the needs of fishermen and pointed to quota transfers as part of annual negotiations.

It’s still unclear what the outcome will be, and that means more uncertainty for the industry.

“They’ve given away far too much,” said Bruce, who works from Peterhead, Britain’s biggest fishing port. “It’s taking back control in name only.”

The industry wanted Brexit to compensate for losses suffered over the past five decades, after the country traded its expansive fishing grounds for access to the common market, but that hasn’t happened, said Scottish fisherman-turned-seafood entrepreneur Jimmy Buchan. There’s also disappointment that foreign boats will still be able to catch within 12 miles of British shores.

“One of the gold nuggets we’ve just given away was not keeping foreign vessels outside of 12 miles,” said Rob Wing, who runs the Cornish Fishmonger, a wholesale merchant based in southwest England. “The bulk of our industry could have been helped so significantly.”

Merchants are also worried about sales to the continent, their top export market. New red tape is causing shipment delays, leaving perishable goods at risk of rotting at customs stations. Many hauliers are no longer taking mixed loads of seafood because of the complex paperwork involved.

“You need a PhD in exporting to fit in with this,” said Victoria Leigh-Pearson, sales director at salmon company John Ross Jr., which had a shipment to Europe delayed for six days due to customs holdups. “Food is being wasted because of this.”

Some British vessels have even resorted to landing their catch in Denmark to make the process easier, cutting out business for British processors, said James Withers, chief executive officer of industry group Scotland Food & Drink. He estimates seafood merchants are currently losing 1 million pounds of exports a day because of the customs chaos.

The deal obviously brings benefits too. It will let U.K. fleets land more overall, with those extra volumes should benefit processors — the middlemen between fishermen and retailers — going forward, Wing said. The government has pledged a 100-million pound package to help rebuild fleets, aging infrastructure and expand the processing sector’s capacity to handle the extra catch.

Many are also happy to do away with some of the restrictive regulations in the EU, such as having to bring all fish caught into land.

The key questions going forward are how quickly the industry can build new vessels and upgrade ports to take advantage of the new deal, and what the future holds in 5 1/2 years’ time.

Johnson has suggested that better terms can be sought in annual negotiations once the phasing-in period is over, though both the U.K. and EU would be able to use retaliatory tariffs if they disagree. Many in the industry doubt that the government will address the fishing industry’s concerns when new negotiations start, instead focusing on sectors with a bigger economic impact.

“Despite that high political profile, we didn’t succeed to move anything like the distance we should have moved,” said Barrie Deas, chief executive of the National Federation of Fishermen’s Organisations. “There is a great deal of skepticism now within the industry that 2025 or 2026 will be any different.”