The president as pariah: Trump faces a torrent of retribution over his role in the U.S. Capitol siege 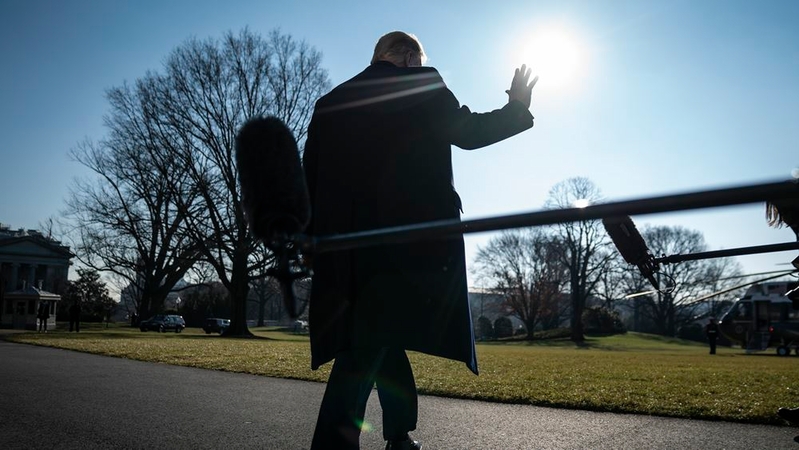 President Trump stops to talk to reporters as he walks to board Marine One and depart from the South Lawn on Tuesday. MUST CREDIT: Washington Post photo by Jabin Botsford

He has been banned on social media, shunned by foreign leaders, impeached (again) in the House, threatened with censure by Republicans, deserted by Cabinet members, turned on by Senate Majority Leader Mitch McConnell, R-Ky., canceled by his hometown of New York City, dropped by the PGA golf tour and snubbed by New England Patriots Coach Bill Belichick.

And that’s just in the past few days for President Donald Trump, who after ruling Washington for nearly four years through a mix of bullying, intimidation, patronage and a sense that his willingness to spew lies and disinformation would have no consequences is suddenly facing a torrent of retribution from those who long excused his behavior or were too scared or powerless to confront it.

The fallout on Trump for his role in riling up thousands of supporters in a speech ahead of their deadly siege on the U.S. Capitol last week has intensified quickly – leaving the world’s most powerful leader as a pariah in many quarters, more isolated than ever.

Trump won 74 million votes in the November election – the second-most ever behind President-elect Joe Biden’s 81 million – but Twitter, Facebook and YouTube have cut him off from easily reaching them in the real-time stream of explosive, demeaning and sometimes dangerous missives that have defined his presidency. Three banks, two real estate companies and the 2022 PGA Championship tournament have severed ties with the Trump Organization at a time when Trump and his family are facing mounting pressure from massive financial debts.

Leaders in tiny Luxembourg canceled meetings with Secretary of State Mike Pompeo, and Belgian leaders condemned the attack on the Capitol, prompting the top U.S. diplomat to scrap a final foreign trip to Europe this week. And some Republicans – beyond Sen. Mitt Romney, R-Utah, the lone GOP lawmaker to buck Trump in January’s impeachment trial – voiced support for the second impeachment effort from Democrats on Wednesday.

“There has never been a greater betrayal by a president,” Rep. Liz Cheney, R-Wyo., the third-ranking House Republican, said in a statement ahead of the vote. House Minority Leader Kevin McCarthy, R-Calif., reportedly floated the idea of censuring Trump, though he opposed impeachment.

“The House of Trump is unraveling and it’s what happens when he’s about to lose power,” presidential historian Douglas Brinkley said. “He was a bully president and so people were fearful of him, but with only a few days left in his tenure people realize he’s about to be an ex-president with a boatload of legal suits and a brand that is no longer neon.”

Trump and his allies lashed out at the widening condemnation. In remarks Tuesday in Alamo, Texas, where he toured a section of border wall, Trump declared that “free speech is under assault like never before,” positioning himself as a victim of the “greatest and most vicious witch hunt” in the nation’s history. Before the trip, the president insisted that his 70-minute address to supporters on Jan. 6 – in which he repeated false claims that he had won the election, implored Vice President Mike Pence and McConnell to block Congress’s certification of Biden’s victory and urged supporters to march on the Capitol – was “totally appropriate.”

Trump’s son, Eric, blamed the damage to the family business on liberal “cancel culture” ahead of Democratic New York Mayor Bill de Blasio’s announcement Wednesday that the city would cut $17 million in contracts with the Trump Organization over operations of two ice rinks, a golf course and the Central Park Carousel.

“It is something that they have been doing to us and others for years,” Eric Trump told the Associated Press. “If you disagree with them, if they don’t like you, they try and cancel you.” The younger Trump then abruptly hung up the phone when asked if the president had incited the crowd, the wire service reported.

The moment has marked a dramatic turnabout for a president who had spent four years using his private resorts and golf courses – including Mar-a-Lago in South Florida and Trump International Hotel in Washington – as places of official government business, charging foreign governments and American taxpayers millions of dollars.

And despite his son’s eagerness to pin the notion of cancel culture on liberals, Trump has often governed as the canceler-in-chief, calling for boycotts of brands including Goodyear tires, Macy’s, Harley-Davidson, the National Football League and a host of media organizations.

For years, Twitter, Facebook and YouTube resisted public pressure from liberal groups to moderate or suspend Trump’s accounts. In the wake of the siege, all three have blocked his access or taken them down, citing evidence that his posts were continuing to foment potential violence.

“The platforms definitely didn’t want to be in this situation – they arrived here under unprecedented circumstances,” Daphne Keller, a former legal adviser to Google who now works at Stanford University’s Cyber Policy Center. “The cynical way to look at it is that before the election, they were afraid to antagonize Republicans too much because Republicans could really punish them politically. After the election, the Republicans did not have as much power and it became politically easier. Then, the flash point last week provided a really clear moment when the decision seemed very justified to many people.”

Keller cautioned, however, that the backlash to Trump has been limited to “an abrupt shift among elites” that has not yet been reflected in the president’s far-right base. Trump also has maintained vocal support from most conservative lawmakers, including Sen. Lindsey Graham, R-S.C., a close ally who briefly distanced himself from Trump last week but flew with him to Texas on Air Force One on Tuesday.

And though Trump clashed with Pence over his insistence that the Constitution offered him no powers to stop Congress’s certification of Biden’s victory, the vice president resisted calls from Democrats to invoke the 25th Amendment that would allow the Cabinet a path to removing Trump from office.

Still, the rejection of Trump is hitting closer to home. Belichick, the Super Bowl-winning coach who Trump views as an ally, took the extraordinary step of declining his offer for the Medal of Freedom, the nation’s highest civilian honor. Several high-ranking White House aides – including Transportation Secretary Elaine Chao, acting Homeland Security secretary Chad Wolf and deputy White House national security adviser Matthew Pottinger – have resigned in the wake of the siege.

And McConnell on Wednesday left open the possibility of voting to convict Trump in the Senate after House impeachment, saying in a statement that “I intend to listen to the legal arguments when they are presented to the Senate.”

Overseas, European leaders “will be extremely relieved to see the back end of the Trump administration,” Brookings Institution analyst Thomas Wright said. “It’s a combination of how they felt all along, but crucially the events of the last week really did shock Europe and the world. They don’t see why they ought to pretend everything is fine.”

Tim O’Brien, author of the biography “TrumpNation,” said the backlash from Republicans, especially McConnell, is likely “creating vast wells of unquenchable resentment” in the president. He predicted Trump will seek revenge on GOP leadership by continuing to hold campaign-style rallies and supporting insurgent candidates.

But O’Brien said it was the economic pain to Trump’s businesses – and the blows to his self-esteem through the loss of his social media platforms and snubs from the PGA and Belichick – that are probably more hurtful to him.

“For someone who has had his nose pressed against the glass of public approval for most of his life over things that others find silly,” O’Brien said, “Donald Trump can’t live without them.”