For Joe Biden, life and destiny converge to offer a new challenge 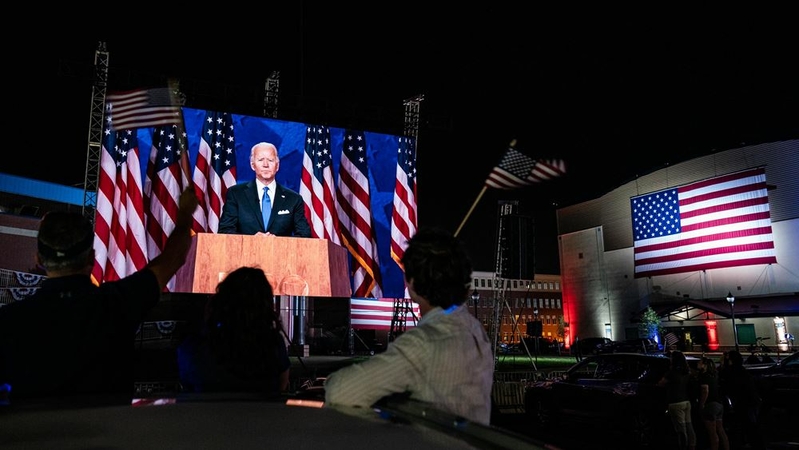 Biden speaks during the Democratic National Convention, in Wilmington, Del., in August. MUST CREDIT: Washington Post photo by Salwan Georges

The first time Joe Biden was sworn into federal office, he stood in a hospital chapel. His two young sons were recovering from a car accident that killed Biden’s wife and daughter and the newly elected senator had refused to leave his boys to travel to Washington. So the secretary of the Senate came to Wilmington to administer an oath that is so rarely allowed outside of the U.S. Capitol that it took a Senate vote – passed unanimously – to allow it to occur. Biden’s oldest child, almost 4-year-old Beau, was wheeled into the packed room on a stretcher, his left leg in traction and suspended in the air, to watch the ceremony.

Biden gave brief remarks in which he questioned whether he would continue serving after six months, much less run for another six-year term.

“Lord God, the whys of life and destiny are often hard,” the Rev. Justin Diny, headmaster at Biden’s high school, said that morning.

Now, more than 48 years later, the hard whys of life and destiny have rewarded Biden – and placed him in another perilous moment.

After building one of the deepest résumés in American political history, with 36 years in the Senate and eight years as vice president to Barack Obama, he will be sworn in again on Jan. 20. This time, the ceremony will take place in Washington. This time, it comes amid not a personal tragedy but a national one. This time, it will be for the office he sought two times before, and only won this time after a roller coaster campaign against two dozen Democrats and a Republican incumbent who fought for months to deny Biden the title he always wanted: president.

He discussed anti-busing legislation with Jimmy Carter, Supreme Court nominees with George H.W. Bush. He ushered in the crime bill with Bill Clinton and approved of the Iraq War under George W. Bush.

He has seen political stars rise and giants fade into the history books. And now the man who was once one of the nation’s youngest senators – turning 30, the required minimum age of a senator, a few weeks before being sworn in – enters the White House as the nation’s oldest president.

But as he achieves a lifelong goal, he faces challenges more daunting than many of his 44 predecessors. The coronavirus pandemic rages on, with tens of millions infected and hundreds of thousands dead, and will dominate the early months of Biden’s presidency as he attempts to accelerate the pace of vaccinations. The economic devastation over the past year has exacerbated the nation’s yawning gaps in income inequality, with the stock market soaring to new heights as job losses are forcing poorer Americans to miss rent payments and endure long lines at food banks.

Biden will confront an existential climate threat, a domestic racial reckoning, and renewed questions about America’s role on the world stage. The outgoing president has ensured that this transition has been among the most volatile in American history, and a mob encouraged by President Trump stormed the Capitol in an attempt to overturn the election two weeks before the inauguration.

His life has been defined by overcoming obstacles. As a child, he had a debilitating stutter that left him terrified of speaking in public, working so steadily to overcome it that years later he would be described by a fellow New Castle County councilor as “the only man he knew who could give an extemporaneous 15-minute speech [about] the underside of a blade of grass.”

The car crash that killed his wife and daughter made him question his purpose and his life. He has talked, though not often, about how it led him to contemplate suicide. His son Beau’s death in 2015 from brain cancer led him to opt out of a 2016 presidential campaign, and he still grows emotional at the mention of him.

Both circumstances would cultivate in Biden a public empathy, which would prove to be a key political attribute as he sought the presidency of a nation in despair.

Still, his presidential campaign this time around seemed as doomed to failure as his first two tries. His party flirted with more liberal candidates, turning toward a deep and diverse field much fresher than the septuagenarian former vice president. The early contests and his occasional verbal miscues seemed to prove that he was out of step, with decisive losses the result.

“He was left by the side of the road after New Hampshire,” said Kate Bedingfield, one of his closest campaign advisers, who will be the White House communications director.

But while Biden never anticipated the drubbing he was dealt, he always maintained that his candidacy would take off once the contest arrived in more representative states – which is what happened after he resoundingly won South Carolina, followed by almost all of the Super Tuesday states. And then, suddenly, the nomination was his.

“Over the course of his career, he has been both personally and politically resilient,” Bedingfield said.

The key to understanding Biden is to understand his outlook on the Senate, where he spent most of his career. It’s the place where the fathers of the institution – there were no women when he arrived – draped their arms around him, helping him heal from his grief and find a new purpose. They taught him lessons about compromise, and about not questioning someone else’s motives. They operated in a world where civil consensus was the highest goal, even if that notion now seems quaint in an institution where partisanship has been weaponized.

“The United States Senate has been my life, and that is not a hyperbole,” he said during a farewell address before becoming vice president in 2009. “It literally has been my life.”

“It becomes who you are,” Reid said. “Like you played for the Yankees or the Dodgers. It’s who you are.”

Those lessons also are likely to inform Biden’s approach to governing. He has proclaimed his trust in institutions, and he has resisted liberal pressure to upend norms, like expanding the Supreme Court or eliminating the Senate filibuster. In his career, he has been less a leader who rallies the masses and shifts public opinion than one who identifies where public opinion is heading, stakes a middle ground, and gives it prominent voice.

“The magic of Joe Biden is that everything he does becomes the new reasonable,” former presidential candidate Andrew Yang said last year while reminiscing about their Democratic primary contest.

But one major unanswered question, one which could define his presidency, is how much room remains for any type of consensus-building. The modern-day Senate has changed dramatically, and whether Biden can still master it will have far-reaching implications for his ability to pass any of the ambitious legislation he is preparing.

For some aides the future has called to mind a bit of gallows humor Obama and Biden used to engage in as they faced an economic collapse that began during the 2008 campaign and shook the transition and administration.

“They used to joke with each other: Is it too late to get out of this thing?” said Anita Dunn, a senior adviser. “That sentiment kind of came back a little jokingly both as the depth of the crisis and what the next president is going to face, how deep the hole dug by the present administration has become.”

Biden ran as a cautious candidate in what seemed like an incautious time. He ran as an empathetic person at a time when the nation’s politics run coarse and caustic. At what seemed like a revolutionary moment, he ran as a restorative candidate. He ran as the anti-Trump, leaving in question exactly how potent his support will be once the divisive ex-president is out of office.

At moments, the candidate who has played the long game seemed dismissive of actually wanting the job he was running for.

“Could I die happily not having heard ‘Hail to the Chief’ play for me?” Biden asked in Iowa, at a time when his rivals were drawing the massive crowds that he lacked. “Yeah. I could. That’s not why I’m running. The irony is the longer I’ve been around, the less that appeals to me. I’ve watched up close and personal what eight years in the White House is like. And I watched it. And it’s not something that I can hardly wait – to move in the White House. But I tell you what: I want to make those decisions because I think I can move the country in a direction that can set us on a path for the next 30 years to lead the world.”

Biden’s self-deprecating humor and flashy smile has always masked the healthy dose of ambition that exists underneath. A nun once recalled a 7-year-old Biden writing a paper declaring he wanted to be president. It is a dream he has pursued for decades.

This time, the moment met him in a way it hadn’t during past campaigns. The man who believes in fate was right for a moment. When Trump’s allies derisively referred to Biden as “Mister Rogers” after one televised town hall, they hit at Biden’s natural appeal. After all, his campaign was about the comfort of the familiar and unthreatening, one which would return the country to tying-its-shoes basics.

“It’s a reaffirmation of his belief in America and that we are better than we have been acting,” Valerie Biden, his sister and one of his closest confidants, said in an interview shortly after the election. “In America we often get the person that we need for the moment. We had Lincoln during the Civil War and FDR after the Depression. My brother is right for these challenges we face today. He knows how to heal. And Joe’s life is about healing and recovery – and that’s what we need as a country.”

The Biden who will be inaugurated Wednesday is the father of four, two living and two dead.

He was mourning his daughter Naomi when he was sworn in for his first Senate term, and in 2015 he suffered the death of his eldest son, Beau. In life and death, Beau has become Biden’s totem for a life of integrity, and Biden has spoken often of him as the inspiration of his latest campaign.

In the two and a half months since Election Day, Biden has alluded several times to Beau, reflecting on both the grief of the past and his hopefulness for the future and intertwining his feelings with those of the wounded country he will now lead.

During his victory speech on Nov. 7, the night he was projected as the presidential winner, Biden said he had been thinking about the hymn “On Eagle’s Wings,” and the faith that sustains him. The hymn, he said, gives him solace – and he hoped it would give a suffering country solace, too.

What Biden did not say was that he and an ailing Beau used to sit on his dock and watch an eagle soar past. The night his son died, Biden watched the eagle circle several times before flying away.

Now, when Biden steps to a lectern, he will be greeted by a presidential seal. It features as its most prominent symbol a bald eagle, a reminder both of what he has accomplished and what he has lost, the whys of life and destiny.