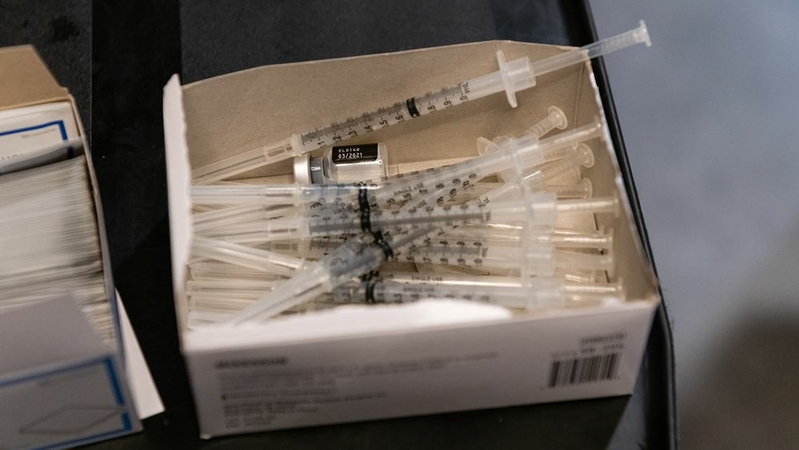 Syringes with doses of the Pfizer-BioNTech covid-19 vaccine while pharmacists move through the Brooklyn Center for Rehabilitation and Healthcare nursing home to distribute them to residents in the Brooklyn borough of New York on Jan. 5, 2021. MUST CREDIT: Bloomberg photo by Eric Lee.

The U.S. government wants states to offer vaccines to millions more Americans as covid-19 infections continue to soar, in a bid to bolster an immunization campaign that’s off to a rocky start.

In recommending that states start immunizing all residents 65 and older, along with all those between 16 and 64 with medical conditions that make them more vulnerable to serious disease, U.S. health officials are clearing a path for about 128 million more Americans to be vaccinated.

About 10 million people have received the first dose of a covid vaccine since immunizations started in late December, according to Bloomberg’s vaccine tracker. The rapid shift in strategy has raised worries that an accelerated rollout, for which many states may not be ready, could lead to new shortfalls down the road.

“The first couple of weeks it was all: Why aren’t they all done, why aren’t you getting them out fast enough?” Maryland Gov. Larry Hogan said in a briefing Tuesday. “The next story is going to be: There’s hundreds of thousands of people waiting for the vaccines and we don’t have any.”

Expanding eligibility is intended to speed up vaccination by increasing demand and giving providers more flexibility, resulting in fewer wasted doses. Yet such a strategy with supplies still limited risks exacerbating the frustration and chaos already playing out in some states. Striking a balance between immunizing quickly and establishing confidence in the U.S. vaccination campaign will be crucial in the weeks ahead.

In a briefing Tuesday, Health and Human Services Secretary Alex Azar also urged states to open up vaccination to younger people with medical conditions that put them at higher risk of severe illness from covid-19. States can ultimately decide how to prioritize the shots they receive.

If the entire country follows the guidelines Azar recommended, another 128 million Americans would immediately become eligible for vaccinations, according to population estimates from the Centers for Disease Control and Prevention. That would expand the pool to 58% of those 16 and older in the U.S.

Demand likely will outstrip supply if states expand immunization to these groups. The U.S. has made about 25 million doses of the vaccine available so far, Azar said, enough to give the first shots to priority groups of health-care personnel and long-term care residents. Both of the vaccines currently available require two shots.

Some states have already expanded vaccination to seniors and other priority groups. Scenes of older people camped out in Florida awaiting a vaccine have become a symbol of the chaos that can ensue when large groups of people suddenly become eligible.

Hogan, the Republican governor of Maryland, said he never wants to see images like those in his state. The current system is slow, but it’s working, he said, and shouldn’t be thrown out given the limited supply.

“I don’t want to lie to people and open the floodgates,” Hogan said.

Other states are embracing expansion. In New York, Gov. Andrew Cuomo said Tuesday in a briefing that the state is opening vaccinations to those 65 and older, as well as those who have compromised immune systems. Hospitals must still prioritize health-care workers and New York City must do the same for essential workers, he said.

Colorado Gov. Jared Polis said infrastructure is already in place to make vaccine available to people ages 65 and older, and the state will start doing so in the next few weeks. “It’s not a major change for us,” Polis said during an online news briefing. “We’re already doing 70 and up. Running the numbers, that’ll add maybe 20-to-30% to that group.”

The number of doses available increases by a few million each week. The Trump administration on Tuesday also announced it will release second doses of the vaccines it had been holding back to ensure people would receive the full course.

Azar said the administration is confident in the manufacturing and quality control processes and therefore feels comfortable shipping shots as they become available. Others disagreed, citing concerns about future supplies.

The U.S. has spent billions of dollars to secure initial supplies of 200 million shots each from Moderna and Pfizer. Those doses are scheduled to arrive through June and July. Vaccines from other manufacturers still in trials may further boost supply in the months ahead. Despite the supply commitments, health systems and state officials have been frustrated with week-to-week uncertainty about how many doses they’ll receive.

“There’s nothing to make me think that we have a supply chain right now that allows us to be more aggressive in the long term,” said Marcus Plescia, chief medical officer of the Association of State and Territorial Health Officials. “We can get a few more people vaccinated because we’ve got a surplus right now, but that surplus is going to dry up.”

Officials Tuesday stressed their view that the federal government’s responsibility is to get shots and supplies to providers. Once they’re out, it’s the responsibility of the states to make sure they get into arms.

Federal leaders suggested local officials start sending shots to pharmacies and other vaccination sites where people can more easily access them than in hospitals. Louisiana, for example, has started immunizing people in pharmacies across the state.

Operation Warp Speed plans to start allocating doses to states based on their vaccination rates, in a shift from its current policy of distributing shots based on population size, Azar said. The new policy would take effect in two weeks so states have time to prepare, he said, meaning the incoming Biden administration would be in charge of implementing it.

Carlos del Rio, executive associate dean at the Emory University School of Medicine, said he supports the vaccination of those 65 and older. Yet simply making the vaccine available is not enough, he said, as states must have funding for distribution.

“That’s a little bit like saying we’re going to send the states bullets and now it’s up to the states to hire soldiers, to find rifles, to train the army and then you can fight a war. You wouldn’t like to be fighting a war like that, right?” he said. “This is the same thing. The Trump administration is releasing bullets to the states, but that’s not going to get us to winning the war.”