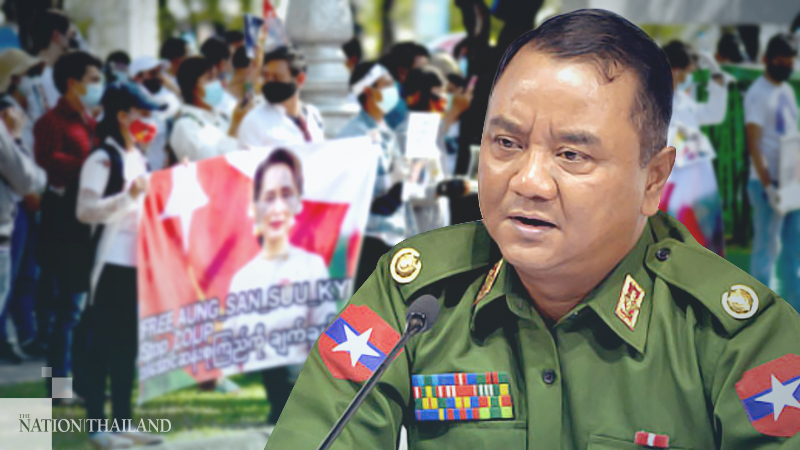 Myanmar’s junta again defended its move to oust the civilian government in the face of nationwide protests, dismissing the impact of U.S. sanctions while showing no signs of a compromise with demonstrators.

Brigadier-General Zaw Min Tun, the lead spokesman for the State Administration Council, said Tuesday the military’s actions were in line with the 2008 constitution and “not a coup.” He added that the regime was taking steps to fight Covid-19 and wanted to attract foreign investment, while seeking to discredit protesters by showing videos of violence against authorities.

“To ensure democracy and prosperity, people should cooperate with us without being emotional,” Zaw Min Tun said in the military’s first official press briefing since the Feb. 1 coup. He said the junta would proceed with an election according to its timeline while “trying not to be violent as much as possible.”

The remarks signal Myanmar’s army is looking to improve its image after tens of thousands of people have hit the streets in defiance for more than a week, including on Tuesday, drawing support from democracy activists in Asia and Western governments. U.S. President Joe Biden sanctioned coup leader Min Aung Hlaing and other top generals while foreign investors have reassessed plans to put money in the country.

Zaw Min Tun said the generals expected sanctions and dismissed their impact, saying it had experience of such things when Myanmar faced international isolation prior to its shift toward democracy a decade ago.

“We will make sure to keep good terms with the UN and all the countries,” he said. “Our council is trying to strengthen ties with all countries.”

The regime shut down the internet for a second straight night, part of efforts to disrupt telephone and internet access to prevent demonstrators from organizing. They have also made changes to the telecommunications law to impose harsher prison sentences for illegal online activity, while also granting themselves new powers to intercept communications and detain dissidents.

Myanmar’s military leaders have struggled to gain control of the streets since ousting the government led by Aung San Suu Kyi, whose party won a landslide victory in November elections. She has urged the country’s 55 million people to oppose the army’s move, calling it “an attempt to bring the nation back under the military dictatorship.”

Suu Kyi and other political leaders are among more than 400 people detained since the coup, a number that keeps rising by the day. Police filed an additional charge against her, Reuters reported on Tuesday, citing her lawyer. Zaw Min Tun said Suu Kyi was in “good health,” while adding that authorities were investigating money laundering at a foundation she runs.

While police and soldiers have largely avoided confronting protesters in major cities like Yangon who have ignored a ban on public gatherings, several demonstrators have been injured in crackdowns — including a woman shot in the head who is now on life support in Naypyidaw, the capital.

Zaw Min Tun declined to say whether the woman was hit with a rubber bullet or live bullet, as protesters have alleged. “We will give you all the information about what the girl did to the police,” he told reporters.

He also urged civil servants to return to work, saying “we will unavoidably take actions against these civil servants after a certain period.” He added that the government was “operating as normal” despite the protests.

According to a copy of the amended telecommunications law seen by Bloomberg News, anyone found guilty of perpetuating a cyberattack to threaten national sovereignty or unity may now face up to five years in prison and fines of as much 30 million kyat (about $22,570). Those who commit such attacks to hurt Myanmar’s relationship with other countries face even stiffer penalties, up to seven years in prison and a 50 million kyat fine.

Those found guilty of spreading fake news or hoaxes online to cause public panic, or publishing private information of another individual without their permission, meanwhile face up to three years in prison and fines of as much as 5 million kyat.

Telenor Group, which owns one of two wholly foreign owned telecommunications providers in Myanmar, on Monday joined mounting opposition to the junta’s proposed cybersecurity bill, saying it gives the regime broad powers including the ability to order lawful interception. The Asia Internet Coalition, whose members include Facebook Inc., Apple Inc. and Google, stated on Feb. 11 that the bill allows for unprecedented censorship, violates privacy and would “significantly undermine freedom of expression.”

“The current very short and limited consultation has not allowed for the required dialog on the proposed Cyber Security Bill,” Telenor said in a statement. “We are concerned that the proposed bill does not progress relevant regulatory frameworks and law for a digital future, nor promotes and safeguards digital safety and rights.”