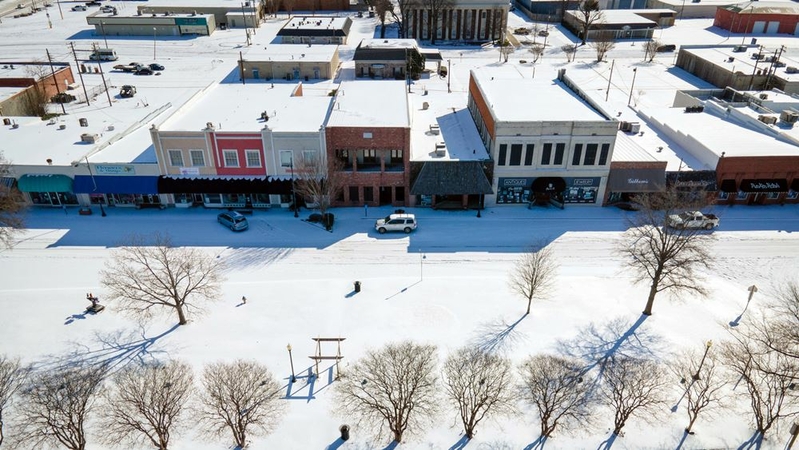 Snow and ice blanket downtown Cleveland, Miss., on Tuesday, Feb. 16, 2021. MUST CREDIT: Photo for The Washington Post by Rory Doyle

At least 14 people are dead in four states from the effects of a record-shattering cold snap and winter storms since Sunday. In Texas, as the electricity grid struggled to keep pace with record demand, people were turning to unsafe means to heat their homes. A woman and a girl died of carbon monoxide poisoning in Houston after a car was left running in a garage to keep them warm, according to police.

The Arctic air has also claimed the life of at least one homeless person in Houston, and a 10-year-old boy died after he fell through ice near Millington, Tenn. A tornado associated with the storm system that helped draw Arctic air to the south struck in North Carolina overnight, killing at least three and injuring 10.

A third of electric customers in Texas were without power Tuesday morning according to PowerOutage.us, because of snow and ice, an overloaded power grid and emergency measures to reduce the electricity demand affecting a number of cities as well as rural areas. About 4.3 million customers were affected.

Texas is unusual in that its electric grid is nearly entirely independent from the rest of the country. When demand exceeds supply, the state is largely unable to import electricity from neighboring states, as is a customary practice almost everywhere else in the country.

The demand, largely driven by the need to heat homes in brutal Arctic temperatures, ran the risk of overwhelming the power grid and triggering uncontrolled outages. The Electric Reliability Council of Texas announced Monday that it was instituting rotating power blackouts.

The blackouts have been anything but rolling; many people have had outages lasting at least 24 hours. The electricity taken off the grid was enough to power 2 million homes.

The U.S. Department of Energy temporarily lifted pollution restrictions to allow power plants to operate and produce at full capacity.

Social media was ablaze with widespread reports that downtown areas, such as in Austin, were lit up “like a shiny island in a sea of black” while neighboring suburbs remained dark in the frigid cold.

In a call to the local ABC13 station late Monday, Abbott said outages were in part a result of private power generation companies having “fallen short.”

“There’s a separate part of the system that is not working right now, and those are the private companies that generate the power that goes into ERCOT. And it’s those private companies that generate power that are not working,” Abbott told ABC13. “They were working up until about midnight last night, but after midnight, some of them literally froze up, and were incapable of providing power, and some are still incapable of providing power.”

ERCOT is the Electric Reliability Council of Texas. It handles about 90% of the state’s electricity load.

Abbott was asked about preparations made to prevent such outages after a cold wave that hit Texas in 2011. He said not enough was done to “gauge for this type of event, because the last time we had this type of weather was more than 100 years ago.”

The Federal Energy Regulatory Commission announced that it would open a joint inquiry alongside the North American Electric Reliability Corp. into power systems.

The regulatory agencies said the inquiry would include work with other federal, state and regional agencies and utilities to help identify problems with system performance, and to help assess what can be done to address those problems, according to a release from the agency.

“For now, the emphasis must remain on restoring power to customers and securing the reliability of the bulk-power system,” FERC Chairman Rich Glick said in a tweet.

The agency said the inquiry would formally begin in the “days ahead.”

A decade ago, the two agencies also conducted an inquiry and produced a report on the severe cold-weather event the Southwest experienced in 2011.

Corpus Christi issued a boil order after a “major water main break” led to low water pressure or no water for some customers. The city has issued an order to boil water before drinking it, cooking with it, or making ice, or instead to purchase bottled water.

In North Carolina a tornado tore through the southern part of the state late Monday, the Brunswick County sheriff said in a morning news conference.

Sheriff John Ingram said early Tuesday that at least three people were killed and 10 were injured in a storm that caused “a lot of destruction” along Highway 17 between the North Carolina coastal communities of Sunset Beach and Ocean Isle Beach, near the border with South Carolina and about 40 miles southwest of Wilmington, N.C. The devastation has left many buildings destroyed and residents trapped in their homes, authorities said, though the full severity of the damage remains unclear. Trees and power lines were also reported down throughout the area.

At midnight, a tornado was spotted in Honey Island, N.C., according to WWAY, about 45 miles west of Wilmington. Shortly thereafter, the National Weather Service reported power lines down along Highway 17 in Brunswick County.

A second winter storm is heading to the same region. Winter storm warnings were issued in parts of Texas, Oklahoma, Louisiana and Arkansas as more dangerous winter weather approached.