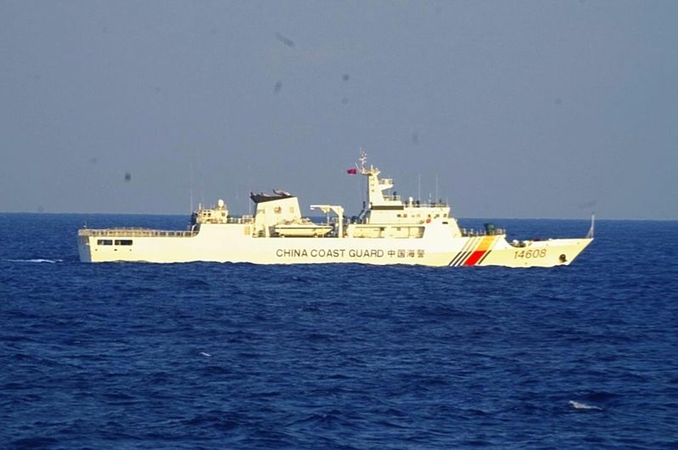 A China Coast Guard vessel is seen in Japanese waters around the Senkaku Islands in October 2020. (Courtesy of the 11th Regional Coast Guard Headquarters)

The government is on high alert after incursions by China Coast Guard vessels into Japanese territorial waters around the Senkaku Islands in Okinawa Prefecture on two consecutive days.

The government announced that two CCG vessels had entered Japanese territorial waters on Tuesday, a day after an incursion by two other CCG vessels.

By around 12:20 p.m. on Tuesday, all four Chinese vessels had left Japanese territorial waters.

Japan is wary of what it views as increasing attempts by China to overturn Japan’s effective control of the Senkakus after the recent enforcement of Chinese coast guard legislation that allows CCG vessels to use weapons.

According to the 11th Regional Coast Guard Headquarters based in Naha, two CCG ships entered Japanese territorial waters off the Senkakus and the Taishojima island at around 4:15 a.m. on Tuesday.

One of the ships — CCG vessel 1305 — was equipped with what appeared to be a gun.

The two ships appeared to be pursuing a 9.97-ton Japanese fishing boat with four crew members aboard when they entered Japanese territorial waters, where they remained for about six hours.

The two vessels that entered Japanese territorial waters around Minamikojima island on Monday also appeared to be pursuing another Japanese fishing boat.

At one point, a total of four CCG vessels had split into two groups in pursuit of the Japanese fishing boat. A Japan Coast Guard patrol boat intervened to ensure the safety of the fishing boat.

At a press conference on Tuesday, Chief Cabinet Secretary Katsunobu Kato said that there had been two other cases in which a CCG vessel equipped with a gun-like device approached a Japanese fishing boat in Japan’s territorial waters — one occurred last year and the other two years ago.

According to the Japanese government, CCG vessels have become larger in recent years, and the fleet now includes 10,000-ton class ships.

The Japanese government has lodged protests through diplomatic channels with Beijing over the moves.

“It is truly regrettable and unacceptable that for the second day in a row they have intruded into our territorial waters and approached Japanese fishing vessels,” Japanese Foreign Minister Toshimitsu Motegi said at a press conference on Tuesday.

A series of Chinese provocations has triggered moves within the ruling Liberal Democratic Party to seek new legislation by using as a reference a bill on territorial patrol submitted to the Diet in 2015 by the then Democratic Party of Japan and then Ishin no To (the Japan Innovation Party).

Currently, if a situation arises that cannot be handled by the Japan Coast Guard, the government issues an order for maritime patrol operations and the Maritime Self-Defense Force takes action. The bill allows the Self-Defense Forces to crack down on illegal activities in territorial patrol zones that have been designated in advance by the prime minister.

At a joint conference of the LDP’s Foreign Affairs Division and other groups, some lawmakers expressed concerns that Chinese provocations cannot be stopped with efforts through diplomatic channels alone.

However, the Japanese government is cautious about introducing new legislation. A senior Defense Ministry official said that if the SDF takes action in peacetime, it would give China an excuse to intervene with its Navy.

According to a source with knowledge of Japan-China relations, China is ready to pursue Japanese fishing boats that enter waters around the Senkakus.

An executive of the Yaeyama fishing cooperative in Ishigaki, Okinawa Prefecture, expressed the sense of crisis among fishermen since the enforcement of China’s coast guard legislation, saying, “Many fishermen are afraid that if they fish around the Senkaku Islands, they will be shot at by Chinese ships.”