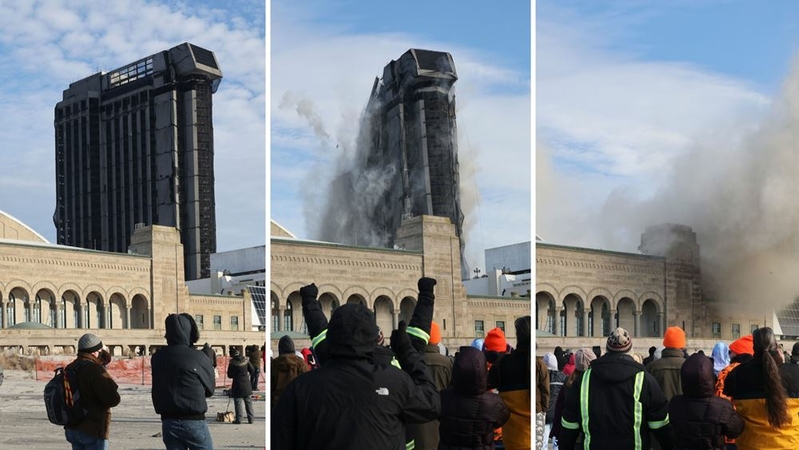 A composite image of the Trump Plaza Hotel & Casino being imploded in Atlantic City, N.J., on Feb. 17, 2021. The demolition of the one-time jewel of former President Donald Trump’s casino empire clears the way for a prime development opportunity on the middle of the boardwalk. MUST CREDIT: Bloomberg photo by Angus Mordant

Trump Plaza, the first casino Donald Trump ever built and a faded vestige of Atlantic City’s glamorous past, came crashing to earth Wednesday morning in a cloud of dirt, dust and noise.

Carefully placed explosives imploded the 39-story white tower on the Atlantic Ocean, which stood empty for years. City officials were keen to destroy it amid complaints that chunks of concrete were falling off the building. A few hundred people in cars paid $10 to park at a former airfield less than 2 miles (3.2 kilometers) away on a freezing, winter morning to watch the Plaza’s final destruction.

While Trump’s faded name could still be seen in the outlines of giant letters that once branded the building, he hasn’t owned it in years. Carl Icahn acquired it when he bought Trump Entertainment Resorts out of bankruptcy in 2016. Icahn hasn’t disclosed plans for the property. The mayor of Atlantic City, who fought to tear down the Plaza, said he wants it replaced with a mixed-use development, perhaps something centered on family entertainment. “The last thing we need right now is another casino,” Mayor Marty Small, D, said in an interview.

Taking down the building represents “turning the page, the dawn of a new era,” Small said. “The Trump era in Atlantic City will be officially over.”

The Plaza opened in 1984, the first of three casinos Trump would eventually own in Atlantic City. All of them would end up in bankruptcy.

The Trump Plaza casino looms above the colorful facade of the Bally’s Casino in Atlantic City, N.J., on Feb. 28, 2004. MUST CREDIT: Bloomberg photo by Emile Wamsteker

Trump became interested in casinos early in his career. The idea of getting into the business first came to him in late 1975, when he heard a radio report about how a strike by hotel workers in Las Vegas had sent Hilton’s stock price sinking — even though the two casino hotels were a small portion of the company’s portfolio.

“It occurred to me that even if I finally got the hotel built and it became a major success in the greatest city in the world, it still wouldn’t be nearly as profitable as a moderately successful casino hotel in a small desert town in the Southwest,” Trump wrote in the book. “What I did shortly after I heard that radio report, was take a trip down to Atlantic City.”

He admits in the book to some bluffing to secure his future partner in Trump Plaza. Early on in the project, he invited executives from Holiday Inn to come see how much work had been done on the site. In fact, the building had barely been started, but Trump gathered “every bulldozer and dump truck” his construction manager could find to make it look like they were busy at work when the Holiday Inn reps came to visit.

“If they got some actual work accomplished, all the better, but if necessary, he should have the bulldozers dig up dirt from one side of the site and dump it on the other,” he said. Holiday Inn decided to team up with Trump on the project. The partnership didn’t last long — in 1986, Trump bought out Holiday Inn’s stake.

The initial success of Trump Plaza would spur more spending. Trump took on more debt, buying and finishing the Taj Mahal in Atlantic City after famously getting in a bidding war over the parent company, Resorts International, with Merv Griffin. At its peak, Trump’s portfolio consisted of four casinos, three in Atlantic City and one in Indiana. The expansion was costly, however, and his company’s high debt load make it difficult to compete with rivals. At one point, Trump’s New Jersey casinos lacked money to put stools in front of slot machines.

Atlantic City was the sole place to gamble legally in the eastern U.S., and it was for a time the largest gaming market after Las Vegas. Atlantic City’s casino revenue peaked at $5.2 billion in 2006. The expansion of legalized betting in neighboring states led to a collapse of traffic to the remote New Jersey beach resort, with more than half of the properties changing hands or shutting down. The city’s nine casinos generated $1.5 billion in sales last year, although online casino games and sports betting delivered another $1.4 billion in revenue statewide.

Tilman Fertitta bought the Trump Marina in Atlantic City for $38 million in 2011, rebranding it as the Golden Nugget. In a recent presentation, Fertitta said he has increased sales by 36% since acquiring the casino and generated a 15% return on investment on the once-money losing operation. Fertitta also used it to build an online betting business with a current market value of more than $800 million.

Hard Rock International bought the Trump Taj Mahal, remodeled and rebranded it. It’s now the second-highest grossing casino in the city after MGM Resorts International’s Borgata. Joe Lupo, President of Hard Rock Hotel & Casino Atlantic City, said at a news conference Feb. 2 that the company was so pleased with the financial performance they’d seen in an otherwise difficult 2020 they were paying out $1 million in employee bonuses.

In 2014 Trump sued to have his name taken off the two remaining New Jersey resorts, saying they had fallen into disrepair. The Indiana riverboat casino was also sold. Now, the Trump empire includes no casinos — not even at Trump International Hotel Las Vegas, which advertises itself as “a sophisticated, non-smoking and non-gaming” luxury hotel.

When Icahn acquired Trump Plaza, it had already been shut for two years. The building had been deemed an “imminent safety hazard,” according to the mayor. “You had chunks of concrete falling from the top floor.”

Small said that in his first state of the city address last year, “the thing that got the biggest applause when we put the slide up was a bulldozer going through Trump Plaza.” He initially proposed a charity auction, where the winner would get the chance to hit the button that would bring the building down. That was scrapped last month due to safety concerns, but Small said Icahn matched the highest bid and donated $175,000 to the Boys & Girls Club of Atlantic City.

It seems fitting the casino’s last act would be to help a city where Small said Trump had a history of “stiffing so many small businesses, mom-and-pop shops.”

In July 2016, Hillary Clinton used the hotel as a backdrop during her failed presidential campaign to give a speech highlighting Trump’s multiple bankruptcy filings.

That prompted a swift Trump response via Twitter: “I made a lot of money in Atlantic City and left 7 years ago, great timing (as all know).”