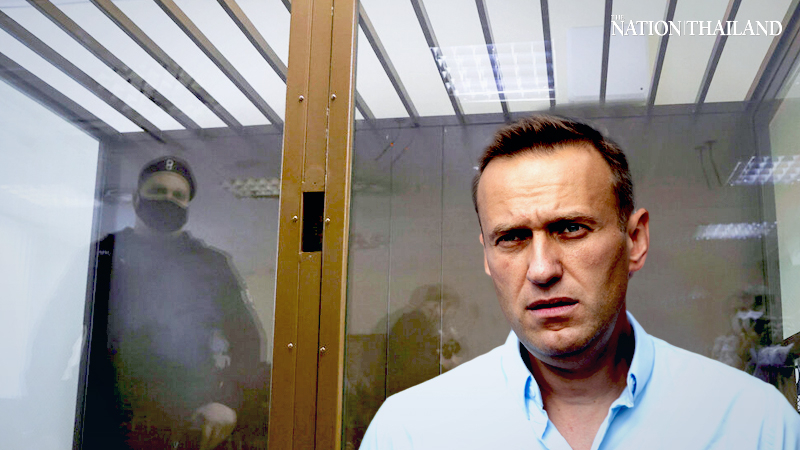 MOSCOW – Jailed Russian opposition leader Alexei Navalny declared a hunger strike on Wednesday after unsuccessful attempts to get medical care for severe back pain, according to an Instagram post in his name.

Navalny survived an August assassination attempt with a chemical weapon that the U.S. State Department blames on Russian security agencies, but he was jailed when he flew back to Russia in January after treatment in Germany.

He was sentenced to 21/2 years in prison for breaching parole conditions in a 2014 fraud case, partly because he failed to report to authorities while under treatment in Germany.

Navalny last week requested painkilling injections for back pain and a right leg so numb that he says it barely supports his weight.

“I have the right to call a doctor and get medicine. Neither of which I am given, stupidly,” the Wednesday post said. It said the numbness was moving to his left leg.

The Kremlin has declined to comment on Navalny’s complaints, calling it a matter for prison authorities.

The post said he was lying in his cell on his bed on a hunger strike, in what he called a major violation of prison rules. He was reading the Bible, the only book made available to him in prison.

The post said was also being “tortured by sleep deprivation,” woken up eight times every night by a guard shining a torch in his face to supposedly ensure he has not absconded.

“Why do prisoners go on hunger strikes? This question worries only those who have not been prisoners. From outside, everything looks complicated. But from the inside, it’s simple: You don’t have any other methods of struggle, so you go on a hunger strike,” the post said. Navalny is denied Internet access, and his team has not indicated how the posts in his name are made, but he meets regularly with his attorneys.

The post said other prisoners were afraid and told him that “the life of a convict is worth less than a pack of cigarettes.”

Navalny is serving his term in Penal Colony No. 2, a notorious prison that former inmates claim uses constant psychological pressure to “break” inmates.

Vyacheslav Kulikov, a member of a commission that monitors prisoners’ conditions, said Monday that monitors visited Navalny and recorded his requests for painkilling injections.

However Vladimir Grigoryan a member of the monitoring commission from Vladimir, around 111 miles east of Moscow, the nearest large town to Penal Colony Number 2, told independent Dozhd TV that “Navalny is just faking it so don’t worry about him.”

Grigoryan who worked in the prison system for 30 years said prisoners like Navalny demanded medicines that ordinary Russians could not get.

Earlier this week, Navalny posted a photograph of himself in prison, with head shaven, and reported that he had received six reprimands in two weeks for rule violations such as getting up 10 minutes too early or going to meet his attorney wearing a T-shirt. “I’m not kidding,” ran a post in his name Monday describing the reprimands.

“It seems the song ‘Bad Guy’ is the soundtrack of my prison sentence,” Monday’s post ran. After two reprimands, prisoners are sent to the punishment cell, where conditions were “close to torture,” he said.

Being reprimanded beneath a portrait of President Vladimir Putin on the wall reminded him of being a schoolboy and getting in trouble, he said in Monday’s post.

Russian authorities rounded up key members of Navalny’s team in January and placed them under house arrest. But Ivan Zhdanov, direction of Navalny’s Anti-Corruption Foundation is outside Russia. His father Yuri Zhdanov was arrested and placed in detention Friday. Ivan Zhdanov said his father’s arrest was political and aimed at himself. He called the case “an entirely new level of baseness and meanness from the presidential administration.

“I won’t hide it. For me this is the worst thing that could happen.”

Navalny’s team is collecting the names of people willing to join street protests this spring, and recording the numbers in an online map. Once 500,000 people join, they say a protest will be held. So far nearly 360,00 people have signed up.