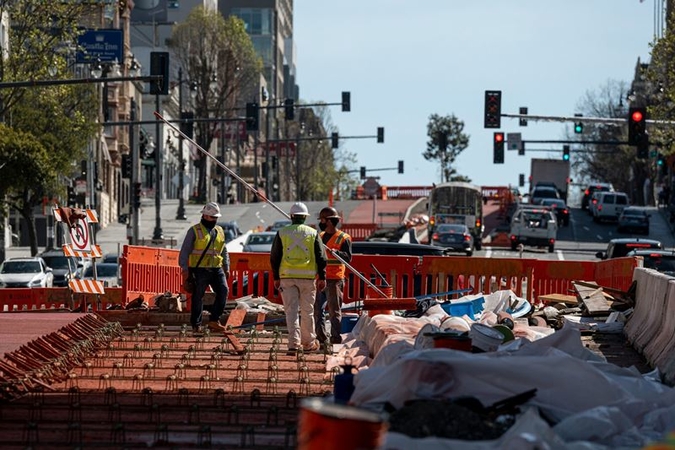 Contractors work on a portion of Van Ness Boulevard under construction in San Francisco on March 22, 2021. MUST CREDIT: Bloomberg photo by David Paul Morris.

President Joe Biden released a sweeping plan to pump money into transportation, renewable energy, manufacturing and efforts to combat climate change — funded by undoing some of the tax breaks that corporations received during the Trump administration.

The $2.25 trillion, eight-year proposal is a follow-up to the $1.9 trillion economic relief bill passed earlier this month. To cover the costs, Biden wants to raise corporate taxes to 28% from 21%. The plan also seeks a minimum tax on profits U.S. corporations earn overseas, increasing the rate to 21% from roughly 13%.

The White House plans a second major package, which could cost $1 trillion or more, later in April to focus on social measures, including expanding health care and paid-leave access and extending the child tax credit –offset by tax increases on wealthy individuals.

Biden will offer his opening argument for the first phase of spending Wednesday in Pittsburgh. Here’re some of the key elements in the plan:

The transportation funding would specifically direct $174 billion to electric vehicles, including sale rebates and tax incentives for consumers to buy American-made cars. It also would provide grants to state and local governments and the private sector for 500,000 charging stations by 2030. It includes funds to electrify school buses and federal vehicles such as Postal Service trucks.

Biden is calling for $180 billion to upgrade the country’s research infrastructure and labs at universities and federal agencies. The funding would also be directed toward climate-science research and addressing gender and racial inequalities in the science, math and technology fields.

A $300 billion initiative to boost American manufacturing incorporates a number of bipartisan initiatives that Senate Majority Leader Chuck Schumer had planned to move in a broader China bill this spring. Biden will call on Congress to invest $50 billion in semiconductor manufacturing and research — as envisioned by the CHIPS Act. There’s also $50 billion for the National Science Foundation to create a technology directorate, modeled after the Endless Frontiers Act.

In addition, he is asking for $50 billion to create a new office at the Department of Commerce dedicated to monitoring domestic industrial capacity and funding investments to support production of critical goods.

Biden is proposing $100 billion for workforce-development programs, including training for those who have lost their jobs, as well as apprenticeship initiatives.

Biden is offering $100 billion to build a more resilient electric grid. He is also proposing a 10-year extension and phase-down of an expanded, refundable investment tax credit and production tax credit for renewable energy generation and storage.

The plan calls for high labor standards and allowing workers on the projects to join unions and bargain collectively. The goal is to move toward 100% carbon-pollution free power by 2035. The plan also directs $16 billion to clean up abandoned mines and gas wells.

The plan would create 10 carbon-capture facilities retrofitted in large steel, cement and chemical production facilities. It expands the bipartisan Section 45Q tax credit for carbon capture, making it refundable and easier to claim. Another $10 billion would be spent on a Civilian Climate Corps that employs Americans in conservation work on public lands and waters.

The plan includes $45 billion to eliminate lead pipes nationwide. It also calls for $56 billion in grants and low-cost loans to states, tribes, territories and disadvantaged communities to improve water systems and $10 billion to bolster rural-well and waste-water systems.

The proposal would provide $213 billion to build and renovate more than than two million affordable homes. The plan includes tax credits to build housing for low-income families and $40 billion for public housing.

The plan includes $100 billion to improve public school buildings, with $50 billion in direct grants and an additional $50 billion leveraged through bonds. The plan also calls for $12 billion for community-college facilities and technology and $25 billion to upgrade child-care facilities and provide incentives for employers to offer on-site child care.

Biden is asking Congress to approve $400 billion for housing and care for the elderly and people with disabilities. He is also proposing $18 billion for the modernization of Veterans Affairs hospitals and clinics.

The plan would raise the corporate tax levy to 28% from 21%, increasing the rate established in President Donald Trump’s tax law. The plan would also institute a 15% minimum tax on a corporation’s profits for financial-reporting purposes. This would prevent companies from racking up tax breaks to whittle down their tax bill to nothing.

The plan would also impose a minimum tax on the profits U.S. corporations earn overseas, increasing the rate to 21% from the roughly 13%. It also includes several measures that would penalize companies that move assets and jobs offshore and eliminates current preferences to book profits overseas.

The plan would eliminate all tax preferences for the oil and gas industry and would also require companies that pollute to pay into the Superfund Trust Fund to cover the cost of fuel-related cleanup.

The plan calls for additional funding for the Internal Revenue Service to increase audits on corporations. The White House says it will release additional details about tax examinations on individuals in the coming weeks.