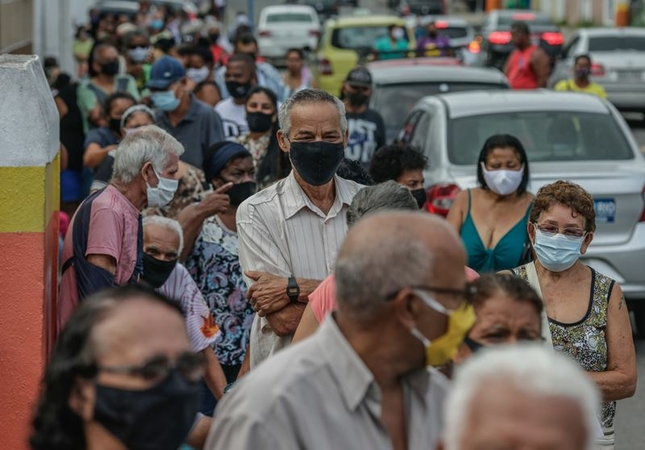 Patients wait in line to receive a dose of the Sinovac Biotech Ltd.’s CoronaVac coronavirus vaccine at a clinic in Rio de Janeiro on March 31, 2021. MUST CREDIT: Bloomberg photo by Andre Coelho

In the global race for coronavirus vaccines, Brazil is limping behind. Less than 10% of the population has received its first shot while the pandemic rages unchecked, killing more than 3,500 people a day.

The man behind Taco Bell and Pizza Hut brands in the country thinks he can do better. Carlos Wizard Martins is leading a group of business executives who want to buy coronavirus vaccines themselves, donating shots to the government while also immunizing their employees. Martins said he offered last week to deliver as many as 10 million shots to the nation, but has yet to hear back from the government.

“The sluggishness of Brazil’s public sector is deeply troubling because while they study our proposal, people are dying,” he said in a video interview.

Martins and Luciano Hang, the firebrand billionaire owner of department store chain Havan, went on a marathon of meetings with government officials last week. They also lobbied for a change in a recently approved law that requires any vaccines bought by the private sector to be donated to Brazil’s public health system, known as SUS, until 78 million people in priority groups have been immunized.

Martins called the law “useless” to both companies and the country as it only delays immunizations.

“Brazil’s situation is only going to get worse,” Martins said. “Soon, we will have 5,000 dead a day and it’s all because of governmental inefficiency.”

In an emailed response to questions, the health ministry confirmed a meeting with Martins and said Minister Marcelo Queiroga supports the private sector’s push to acquire vaccines as determined by laws. It declined to comment on specifics of the offer.

Though Martins criticized the public sector’s red tape, he stopped short of naming President Jair Bolsonaro as a culprit. In fact, Martins was briefly named an aide at the health ministry last year, only to withdraw a few days later after coming under fire for suggesting Brazil should recount its covid deaths.

Martins declined to say whether he still supports the president, who’s been harshly criticized for his handling of the crisis. The businessman says Brazil’s response has always been haunted by the “ghost of ideology.”

Martins, 64, made his fortune by creating a network of 2,600 franchised language schools in Brazil, a business he sold to Pearson Plc for about $570 million in 2013. Born in the southern city of Curitiba to a seamstress and a truck driver, he learned to speak English through the local chapter of the Mormon Church. Later, he taught the language as a side job, which evolved into his Wizard schools.

Now, his main activity is franchising some of the U.S. most iconic fast-food brands in Brazil, including Pizza Hut, KFC and Taco Bell, businesses that suffered a heavy blow from the pandemic. The brands’ 360 stores are “currently operating at loss,” Martins said. He also owns Mundo Verde, a chain of health supplement stores, and a stake in another language school venture, Wiser Educacao, both of which are faring better during the crisis despite the government’s “very weak” support to companies.

Martins’s businesses have a total of 50,000 employees, he said. They would be first in line for a shot if he has his way. He estimates Brazil will take four to five months to immunize risk groups. After that, under the current law, companies can keep as many as half the shots they buy, donating the rest to SUS.

The government has been under pressure to speed up vaccinations, as the nation registered more than 321,500 dead from the virus. So far, Brazil has administered 22.6 million doses, according to data collected by Bloomberg. That’s enough to give one shot to 8.4% of the 212 million population, and fully immunize just 2.4%. At the same time, the nation is leading the world in new cases of the disease and this week notched back-to-back daily records of over 3,700 deaths.

Martins wants the legislation changed so he can start vaccinating his employees right away, donating the same number of doses he uses to the government. He says other companies, such as Carrefour SA’s Brazil unit, signaled interest as well.

Carrefour is “looking into possibilities, but there’s nothing concrete,” the company said in an emailed statement.

Even if Martins pulls off the regulatory changes he’s hoping for, getting 10 million shots to Brazil seems like a tall order at a time governments around the world are scrambling for vaccines. No purchase agreements have been signed, he said, adding he’s hoping to pay $5 to $10 per dose. He declined to specify which vaccines the group is looking to buy.

Alan Eccel, who owns foreign-commerce consultancy NDI and worked with Hang in the past, is behind securing the shots. Negotiations include only vaccines approved by local regulators and still require authorization from several branches of the government, he said, adding he’s talking to either the laboratories themselves or local representatives in hopes to gain access to any surplus doses they might have.

On Wednesday, health regulator Anvisa cleared Johnson & Johnson’s single-dose vaccine for emergency use in the country. It had already authorized shots from Sinovac Biotech Ltd, Pfizer Inc and AstraZeneca Plc.

Martins is confident he can deliver the shots if the government does its part.

“In Brazil, the education, the economy, the sports are all paralyzed. Even churches are paralyzed. We can’t accept spending 2021 as hostages of the pandemic,” he said.