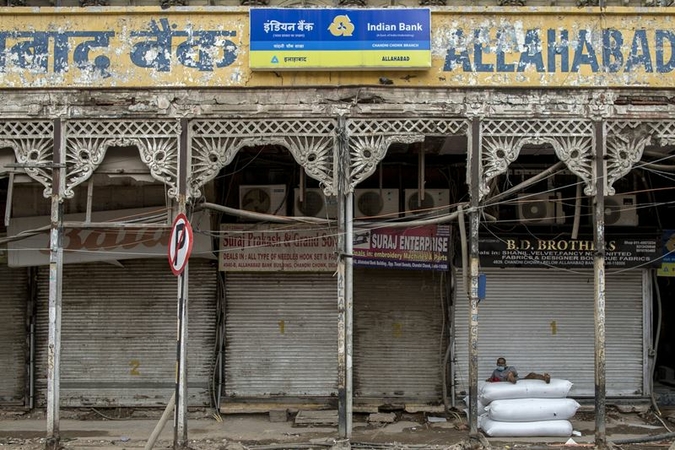 A man sits outside shuttered stores in New Delhi on Aug. 31, 2020. MUST CREDIT: Bloomberg photo by Anindito Mukherjee.

A short drive from the capital of New Delhi, Gurugram has become one of India’s wealthiest cities with business-friendly policies that have attracted multinationals such as Alphabet’s Google, PepsiCo and Nestle India. But suddenly that reputation is at risk.

A slowing economy and a dearth of new jobs has prompted northern Haryana state, where Gurugram is located, to implement a new law last month that limits private companies from hiring workers from other states. Passed by a government controlled by Prime Minister Narendra Modi’s ruling Bharatiya Janata Party, such laws are quickly becoming popular with other states.

The law in Haryana has raised concerns among foreign business groups and prompted them to look elsewhere. One Korean logistics company that recently shifted operations to Gurugram is now drawing up alternate plans because its skilled workforce doesn’t meet requirements under the new law.

“The current restriction is something opposite of ease of doing business,” said Hee Chul Jung, secretary-general of the Korean Chamber of Commerce and Industry in India. “The new regulation could scare future investors away that favor flexibility and a dynamic business environment.”

Millions of jobs were lost during last year’s nationwide lockdown, dealing a blow to Modi’s promise of generating adequate employment for the world’s youngest and biggest workforce as the economy suffered its worst contraction since 1952. Now more states are forcing companies to hire local, setting up internal trade barriers that could further hinder growth in Asia’s third-biggest economy.

The southern state of Andhra Pradesh led the way in 2019 with a step for reserving jobs for locals in factories. The mines-rich state of Jharkhand then approved a similar policy last month, while a top regional party in Tamil Nadu has also promised a job-protection plan if wins upcoming elections.

The law in Haryana took effect last month. It provides a 75% quota for job seekers from the northern state for posts in private companies with a monthly salary of less than $683 (50,000 rupees).

“This cure is worse than the disease itself,” said Ravi S. Srivastava, professor and director of the Centre for Employment Studies, Institute for Human Development. “They are doing this for short-term political appeal. This is easier than creating proper infrastructure and an environment for more jobs.”

Unlike Singapore’s move to offer incentives to companies that hire local workers, the laws in Haryana and other Indian states force businesses to comply. Rather than strong-arming investors, the government should skill people so they can be recruited easily, said Himanshu Baid, chairman of the medical technology division at the Confederation of Indian Industry. “Industries need the best human resources from where ever they are available in the country,” he said.

Dushyant Chautala, Haryana’s deputy chief minister, defended the move during a press briefing in March, saying it would bring jobs to young people and strengthen industries. He couldn’t be reached for comment through several phone calls to his office and residence.

While the laws are ostensibly aimed at helping young workers, labor rights advocates have warned they aren’t compliant with constitutional guarantees including freedom of movement, a right to livelihood, and no discrimination based on place of birth.

“The way the Haryana law stands, it looks excessive and of an excluding nature,” said Tanima Kishore, an advocate in the Supreme Court of India, who has worked on labor rights. “It can be challenged on the ground that it violates people’s constitutional right to carry on any occupation or trade in any part of the country.”

Apart from possible legal flaws, the law risks pushing away companies that have helped make Gurugram attractive. The city is a hub for offshore back-office operations and needs a workforce highly proficient in the English language, a skill that may not be easily available in any one state.

“It is a slippery slope,” said Jean Dreze, a visiting professor with Ranchi University in eastern India. “If many states emulate these policies there is a risk of adverse effects on employment opportunities for large numbers of disadvantaged workers.”