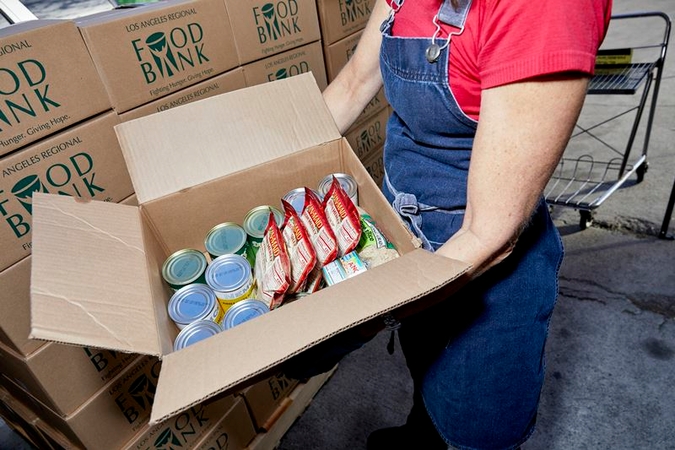 During the pandemic, 50 million Americans have become food insecure. Nationally, SNAP provides help to more than 42 million people each year. MUST CREDIT: Photo by Alyson Aliano for The Washington Post.

The Biden administration has abandoned the Trump administration’s opposition to emergency nutrition assistance going to the lowest income households already at the maximum benefit levels.

In two lawsuits in Pennsylvania and California, plaintiffs argued that Trump’s agriculture secretary Sonny Perdue misinterpreted a section of the Families First Coronavirus Response Act in a way that denied millions of the neediest Americans access to emergency allotments of Supplemental Nutrition Assistance Program (SNAP), the program formerly called food stamps. In Pennsylvania, the suit alleged that the U.S. Department of Agriculture under Trump denied any emergency allotments to nearly 40% of the state’s SNAP households.

Biden’s agriculture secretary Tom Vilsack moved on Thursday for voluntary dismissal of the agency’s appeal in these cases, entering into a settlement that will provide $1 billion per month in additional food assistance to an estimated 25 million people in very low-income American households.

Starting this month, households that had not received at least $95 per month in increased benefits through emergency allotments during the pandemic – because they were already at or close to receiving the current maximum benefit – will now be eligible to receive additional benefits. Benefit levels will remain unchanged for households that have been receiving increased payments of at least $95 per month. States may need a few weeks to update their systems and get the additional benefits to participants, “but it should be smooth sailing from here on out,” said Stacy Dean, deputy undersecretary of the USDA.

“We’ve seen the food insecurity numbers through the Census Pulse data and knew we needed to do everything we could for the truly struggling low-income households,” Dean said.

Biden signed an executive order shortly after taking office in January ordering the agency to reconsider the emergency allotments. Later that month, Vilsack began to focus on the issue.

“The emergency SNAP increases authorized by Congress last year were not being distributed equitably, and the poorest households – who have the least ability to absorb the economic shocks brought about by COVID – received little to no emergency benefit increases,” Vilsack said in a statement on Thursday. “As part of President Biden’s commitment to deliver economic relief and ensure every family can afford to put food on the table, today’s actions will provide much-needed support for those who need it most.”

Under the Trump administration’s interpretation of the act, if a recipient was already receiving the maximum SNAP benefit, he or she was not eligible for the additional Families First act’s emergency benefit. But Judge John Milton Younge of the U.S. District Court for the Eastern District of Pennsylvania ruled in September that the administration was ignoring the intent of the law.

The USDA continued to resist, telling Pennsylvania officials they would not respond to their request for additional benefits and filing a motion for the court to clarify its order.

In October, Younge called out the Trump administration’s USDA for “egregious disobedience” that “flouts this court’s basic authority to preserve order and administer justice.”

Despite a promising rebound in the labor market last month, Vollinger said it is important to compare unemployment now to February 2020, before the pandemic took hold: “The ranks of long-term jobless is significant – they are now 40% of the officially unemployed. That is stunning, and the economic situation they are in is more dire.”

Food insecurity is just one of the problems they face, she says.

“This has been such a welcome development to people who have been frustrated by the lack of the prior administration using all the tools in the toolbox to address the scope of this crisis,” Vollinger said.

Since the start of the pandemic, USDA has issued about $29 billion in additional benefits, to bring all SNAP households up to the maximum benefit for their household size. Among households that received little to no benefit increase because of the Trump administration’s interpretation of the Families First act, about 40% have children, 20% include someone who is elderly and 15% include someone who is disabled.

“We recognize SNAP doesn’t just help boost and stabilize the economy, it has incredibly long-term benefits for health and well-being,” said Julie Morita, executive vice president of the Robert Wood Johnson Foundation, a philanthropy. “But it is my understanding that this [SNAP expansion] is temporary, until the end of the pandemic. We need to look hard at the program and ask if it was strong enough before the pandemic.”