‘Monster Hunter Rise’ is a grand Japanese homecoming, made by a more confident team 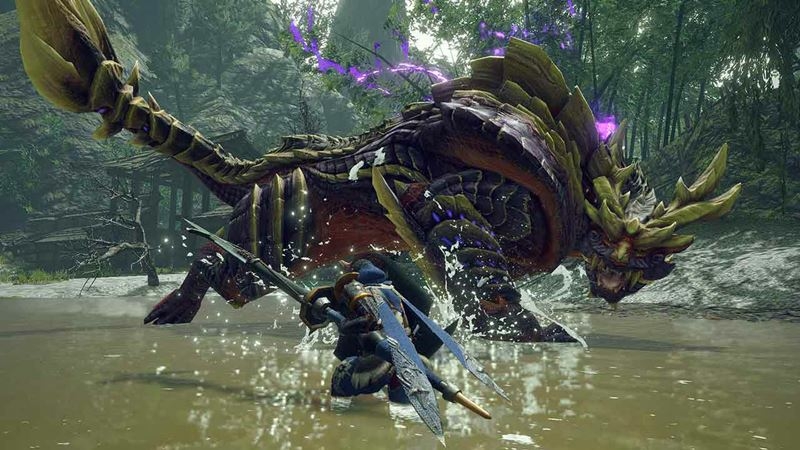 The shell and armor for the flagship monster in “Rise,” Magnamalo, are inspired by traditional samurai armor. MUST CREDIT: Image by Capcom

In platform and premise, “Monster Hunter Rise” may seem like a bit of a risk.

2017’s “Monster Hunter World” became the best-selling game in publisher Capcom’s history, no small feat with an oeuvre that includes the Resident Evil, Street Fighter and Mega Man brands. But that game came with a lot of aesthetic changes that enabled its success. It was the first game to release with high-budget graphics and effects, debuting on PlayStation 4 and Xbox One before a PC release that pushed sales and broke Capcom records. Although the series always featured out-of-the-box eclectic monster designs, the ones in “World” focused on dinosaurs, globally recognized but creatively a bit stale.

“Monster Hunter Rise” is a thematic and technological return home. Even though the series debuted in 2004 on PlayStation 2, it did not take off until it arrived on the PlayStation Portable and Nintendo 3DS mobile platforms. And although “World” was a global hit, fans in Asia probably were waiting for a return to mobile platforms. Now that it’s here, the game’s embrace and love of Japanese culture feels like a celebration.

Still, there were concerns that the team was swinging too hard by focusing the entire game on Japan and its culture. Director Yasunori Ichinose admitted as much last month, saying he was “a bit worried” over the response to the Japanese themes. But producer Ryozo Tsujimoto said Monster Hunter’s return to Japan was always in the cards sooner or later.

“Director Ichinose-san likes the Japanese and Asian aesthetic in general, but we’d only incorporate Japanese/Asian design in ‘Monster Hunter Portable 3rd,’ which was only in Japan,” Tsujimoto told The Washington Post. “We thought we’d come back to revisit those aesthetics after a few titles, now that there’s more that can be done from a technical perspective.”

The Japanese focus also allowed the team to get creative with its monster designs, drawing from the team’s own culture and childhood folklore to create art that feels culturally authentic and full of native passion. Tsujimoto said the focus really came from a desire to create a mainline game that stands apart from the rest.

“We thought by connecting the monster ecology and the yokai lore together, we could come up with new designs, so we shared a lot of monster ideas and then selected what works with gameplay,” Tsujimoto said. Tsujimoto is the son of Capcom’s founder Kenzo Tsujimoto and has been the public face of the series for more than a decade.

Yokai folklore depicts a class of supernatural beings, monsters and ghosts. In “Rise,” the most recognizable creature is likely the Tetranadon, based on the frog-like demon that also inspired Sanrio cutie megabrand Keroppi. The flagship monster in “Rise,” Magnamalo, isn’t yokai, but his shell and armor is inspired by traditional samurai armor.

Some were surprised that “Rise” would be a Nintendo Switch exclusive for at least a year. But given that Capcom recently announced that it shipped 4 million copies of the game in three days, the company probably is not second-guessing the decision. “World” shipped 5 million in the same time period, but across PlayStation 4 and Xbox One consoles.

Mobile gaming in Asia does not carry the same stigma it does in the U.S. People of all ages play video games on their phones or handheld devices, and oftentimes it was “Monster Hunter.” And the Nintendo Switch was only just released in China, where console gaming is a niche market, and has already dwarfed sales of the PlayStation 4 and Xbox One consoles.

YouTuber GaijinHunter, who lives in Japan and has covered the series for years, said last year that given the lopsided global success of “World,” Japan was craving a mobile game, and he correctly predicted a Switch release. He tweeted charts showing how past titles and “World” performed in Japan.

But Monster Hunter games are almost always about looking forward, not back. Many features added in past games endure and survive in all subsequent titles, except the third game’s ill-advised underwater hunts. “World” was such a graphically intensive game, but Tsujimoto said the team was not worried about the limitations because they focused keenly on creating for the Switch hardware.

This feat was largely achieved by using Capcom’s internal RE Engine, which has powered its most recent Resident Evil games. A lower-tech, large-scale Switch game was an interesting test of the engine’s scalability, one that it largely passed. But the jump back to portable meant the team had to redo many of the game’s menu systems, which will take up a good portion of any monster hunter’s time.

“For ‘Rise,’ we developed the game with visibility in mind,” Tsujimoto said. “For example, we changed the colors and the shapes of the item icons for the consumables. Also, when the weapon sharpness goes down, we added sound effects and visual effects on the screen to make it more noticeable.”

Longtime monster hunters will also recognize the crunchiness of the user interface audio, and the large bold colors for status effects. The subtitles are also huge and easy to read.

There was also some fan concern over how the game might play online, given the Switch’s history of poor service. But Nintendo recently updated its aging servers just in time for “Monster Hunter Rise.” The Post asked Tsujimoto whether the team had concerns, or whether it made special requests or entreaties to Nintendo to upgrade its servers.

“Throughout the development process, [Nintendo] have been very supportive in responding to all our questions and requests,” Tsujimoto said without specifying. “We were able to develop this game because we were able to work closely together with Nintendo.”

The Monster Hunter series has always been a sleeping giant in the games industry. “World” was a wake-up call for the world. With strong sales and a stronger identity, “Rise” seems to declare that Monster Hunter has finally risen.