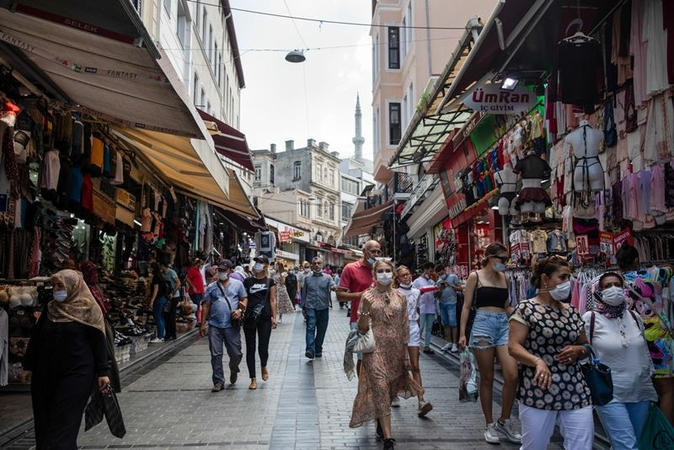 Stronger-than-expected U.S. jobs data on Friday prompted traders to price in an earlier start to Federal Reserve interest-rate increases. That’s fueling concern the higher returns offered for risk-free investments in the world’s largest economy may drive even more money away from emerging markets. Demand for developing-nation assets waned in March, with flows to equity funds falling to less than a third of the levels seen in February and bond funds seeing outflows, according to EPFR Global data.

Morgan Stanley is staying bearish on emerging-market currencies, saying the slow pace of vaccine rollouts in many developing economies is threatening to ensure growth will lag behind the U.S.

Meantime, Citigroup expects higher U.S. yields and a resilient dollar to put further pressure on the asset class in the coming months.

“This quarter can be big for the dollar and not necessarily amazing for emerging markets,” said Luis Costa, Citigroup’s London-based head of CEEMEA strategy. “We don’t believe the U.S. curve is pretty much done adjusting. Between now and June/July, we could see a further leg higher here in yields.”

Developing-nation currencies and bonds posted their first quarterly decline in a year in the three months ending March 31, while the dollar approached its strongest level since November. Stocks slid for the first month since September, paring their gains for the quarter.

Investors will turn their attention this week to inflation data across emerging markets as they seek clues on the path for monetary policy after Turkey, Russia and Brazil raised borrowing costs last month.

– Turkey’s inflation accelerated as expected to an annual 16.2% in March, up from 15.6% the previous month. That leaves the new central bank chief little room to enact the interest-rate cuts that would mollify President Recep Tayyip Erdogan. Central bank Governor Sahap Kavcioglu signaled last week he wouldn’t stray from his predecessor’s hawkish policies.

– Russia’s inflation probably accelerated to 5.8% in March, when the central bank raised interest rates in an effort to combat the effects of ruble weakness and rising food prices. The ruble was the worst-performing emerging-market currency last week amid concerns over U.S. sanctions.

– Colombian inflation data, scheduled for Monday, may show a slowdown in March and push traders to trim odds of a tightening cycle starting this year.

– While Chile’s March inflation figures on Thursday may flag an increase from a month prior, investors will be more focused on what a renewed lockdown in the nation’s capital means for a recovery. Chile’s vaccine rollout has been the quickest in the region, yet peso bulls are eyeing near-term risk as covid cases reach record levels.

– Mexico will release both March CPI data and central bank meeting minutes Thursday, offering clues on the monetary authority’s plans. Data-dependent policy makers kept the key rate at 4% in March given an uptick in consumer prices. Industrial production figures for February are set to be posted Friday.

– Thailand on Monday reported consumer prices fell 0.08% in March from a year ago. The Philippines, Taiwan and China are due to report similar data on Tuesday, Thursday and Friday, respectively. China’s producer price index probably rose to the highest in more than two years last month, according to economists. Quickening price growth is raising concern the country will export inflation globally given its role as manufacturer to the world. Philippine inflation is expected to remain above the central bank’s 2% to 4% target band for a third month due to rising food prices. The peso has fallen 1% this year

– India’s central bank will keep interest rates at a record low when policy makers meet Wednesday, according to all of the economists surveyed by Bloomberg. Bond traders pared bets that the central bank will shift to a tighter policy stance as early as this year after the nation reported a record jump in coronavirus cases. “We will look for any guidance on possible normalization of liquidity conditions,” Rini Sen, an economist at Australia & New Zealand Banking Group in Bengaluru, wrote in a research note. “At this juncture, the financial system is in a unique environment of excess liquidity but rising long-term yields on government securities.” India’s local bonds have lost 1.3% this year in dollar terms, according to a Bloomberg Barclays index.

– Investors will watch Peru’s central bank decision on Thursday for any signs of change by the monetary authority. Borrowing costs have been steady at 0.25%, the lowest in Latin America, since last April. The nation is also scheduled to post trade balance figures for February.

– Poland’s central bank will probably keep interest rates unchanged. Polish inflation unexpectedly rose in March to the highest level since September, piling pressure on the country’s central bank to reconsider its dovish stance. The zloty strengthened against the euro last week after touching a 12-year low on March 29.

What Else to Watch:

– The International Monetary Fund and World Bank’s Spring meetings will take place virtually for a second year starting on Monday. The IMF will post its updated World Economic Outlook on Tuesday, with Managing Director Kristalina Georgieva already indicating an upgrade to January’s forecast for 5.5% global economic growth for 2021.

– China, Indonesia, Malaysia, Taiwan and the Philippines will all release foreign-exchange reserves data on Wednesday.

– The Philippines will publish February trade figures on Thursday.

– Taiwan’s trade statistics for March are due Friday. Robust export growth has helped the local dollar defy gains in the U.S. currency this year, weakening just 0.8%.

– In Brazil, investors will weigh the risk of spending-cap breaches as officials debate the budget. They will also watch a reading of March IPCA inflation data on Friday as the pandemic rages on.