Inflation has gone k-shaped in the pandemic like everything else 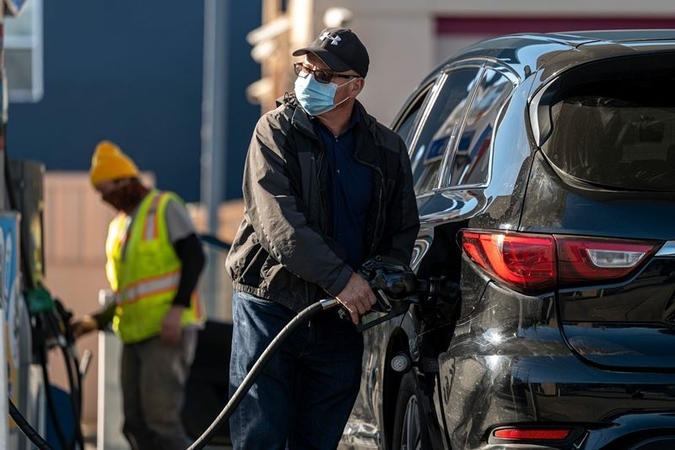 A person wearing a protective mask holds a fuel pump nozzle at a Chevron gas station in San Francisco on March 11, 2021. MUST CREDIT: Bloomberg photo by David Paul Morris.

Low-income Americans bore the brunt of job losses when the pandemic arrived. Now they’re getting hit hardest by price increases as the economy recovers.

The headline consumer inflation rate in the U.S. remains subdued, at 1.7% — but it masks large differences in what people actually buy.Some of the biggest price hikes of recent months, for example, have come in gasoline. A gallon of regular is up 75 cents since late last year — adding more than $60 a month to the budget of someone who fills up with 20 gallons a week.

Food-price inflation is running at more than double the headline rate, and staples like household cleaning products have also climbed.

Price increases like these are causing trouble all over the world — and they tend to hurt low-income people most. That’s because groceries or gas take up a bigger share of their monthly shopping basket than is the case for wealthier households, and they’re items that can’t easily be deferred or substituted.

An analysis by Bloomberg Economics, which reweighted consumer-price baskets based on the spending habits of different income groups, found that the richest Americans are experiencing the lowest level of inflation.

Those same high-earners already posted windfall gains during what’s been labeled a K-shaped recovery from the pandemic. Their net worth surged, thanks to booming stock and real-estate markets — and they mostly kept their jobs and were able to work from home.

The richest 10% of households captured 70% of wealth created in 2020, according to the Federal Reserve, while the bottom half got just 4%. A January study by Opportunity Insights, a Harvard research project, found that the recession was essentially over for those making at least $60,000 a year, while employment among the lowest-paid — who earn less than half that amount — was still almost 30% below pre-pandemic levels.

The question of who exactly gets hurt by higher prices could become more urgent as inflation accelerates. Most economists expect a pickup in the next 12 months.

The Fed, which is in charge of keeping inflation under control, says any increase will likely prove temporary. The central bank isn’t planning to use its inflation-fighting tool of higher interest rates anytime soon.

The idea behind the Fed’s new thinking is that allowing the economy to run a bit hotter — and inflation to creep a bit higher — will actually help to reduce income inequalities, because it will encourage a strong jobs market that benefits low-paid Americans the most. There’s some evidence that this is already happening in the restaurant, hotel and other service industries.

A United Nations gauge of global food costs rose for a ninth straight month in February, the longest run of increases since 2008 when the world faced the first of two food crises within a few years.

“The food price story and inflation story are important to the issue of equality,” says Carmen Reinhart, the World Bank’s chief economist. “It’s a shock that has very uneven effects.”

The problem of K-shaped inflation predates the pandemic and may have deep-rooted causes, according to Xavier Jaravel, an assistant professor at the London School of Economics.His research has shown that a key reason why richer people experience lower rates of inflation is that there’s more competition among producers for their dollars — leading to higher levels of innovation in the kind of goods and services bought by the wealthy, which helps keep prices down.

“One can hope that statistical agencies around the world will soon adopt new data sources and price indices to better measure inflation inequality,” Jaravel wrote in a recent paper, “and that economists will pay more attention to the distributional effects of prices.”