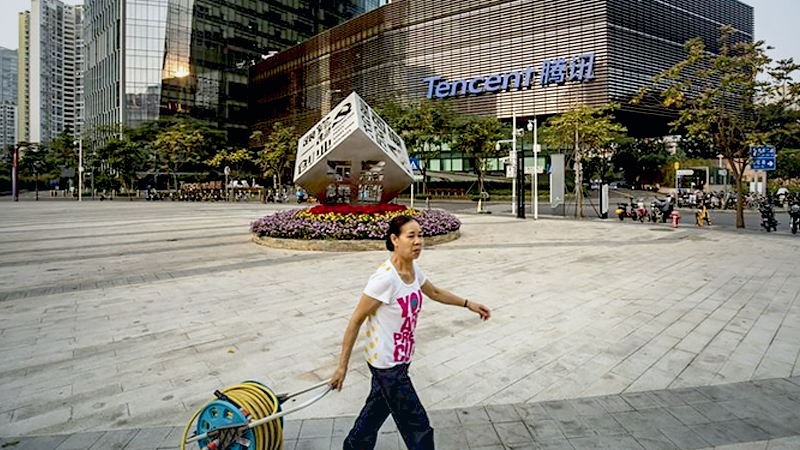 A worker walks past an installation reading “Follow Our Party Start Your Business” in front of the Tencent Holdings Ltd. headquarters in Shenzhen, China, on March 20, 2021. MUST CREDIT: Bloomberg photo by Qilai Shen.

At the height of the global pandemic in October, more than 6,000 people packed into a new 25-acre stadium in Shanghai to watch one of the world’s biggest sporting contests. Another 45 million tuned in online, about as many as watched the six games of the 2020 NBA Finals on TV. The matchup was the League of Legends world championship — a watershed moment for competitive gaming and its overseer Tencent Holdings Ltd.

Asia’s most valuable company has set its sights on a billion-dollar esports arena that already boasts more regular viewers than the National Basketball Association or the National Football League. Tencent has placed pro gaming at the heart of its ambition to dominate online entertainment, from mobile games and video streaming to social media. It’s betting that esports will entice and retain the internet audiences it needs and eventually grow to something approaching the $10-billion-plus NBA.

Key to realizing that vision is Tencent’s blockbuster League of Legends battle arena title and TJ Sports, the outfit it set up in 2019 to organize and promote the game’s competitive play in China. While total revenue in TJ’s first two years just surpassed 1 billion yuan ($152 million), the fledgling company intends to create original content such as reality shows and livestream channels around its star players and teams, and peddle merchandise.

“Esports is like the Super Bowl, which isn’t just a sport event but also a vehicle of art and entertainment,” said TJ co-Chief Executive Officer Leo Lin. “We are going for the direction of connecting esports with our games and wider entertainment business.”

Esports show how Tencent thinks about its long-term future. The world’s largest games publisher has invested billions of dollars in talent agencies, streaming sites and tournament organizers to create the infrastructure necessary to turn pro gaming from a niche into an instrumental part of its growth strategy. TJ expects to double overseas viewership as soon as this year and aims to do the same with media rights revenue from outside China.

“Tencent’s investing in esports for the long haul, because it breaks the boundaries between different businesses from licensing to sponsorships and ticket sales,” said Chundi Zhang, a gaming analyst with Ampere Analysis. “Especially with competition for attention intensifying and user acquisition costs growing in the gaming market itself, esports still has huge untapped potential.”

Shenzhen-based Tencent, which operates some of China’s largest Netflix-style and e-book services as well as producing tentpole films and games, already knows how to monetize popular content.

Competitive play in Tencent-published games like Honor of Kings and PUBG Mobile enhances the longevity of the firm’s biggest cash cows and feeds its content divisions. That in turn helps portfolio companies like Huya Inc. and Bilibili Inc. Apart from reality shows and music festivals, Tencent last year debuted a drama series called CrossFire, which tells the story of a wheelchair-bound teenager trying to make it as a pro gamer in the online shoot-em-up by that name.

But esports is also a key gateway to tapping foreign audiences for Tencent, which hasn’t struck gold on any app quite like ByteDance’s video sensation TikTok. The company reaches most people outside China through games like PUBG Mobile — among the most popular mobile esports titles in Southeast Asia — and League of Legends, which is regularly played by tens of millions worldwide.

Under TJ’s helm, the League of Legends Pro League (LPL) in China has become the world’s largest esports league by its sheer size: 17 teams compete in hundreds of face-offs every year, with the 2020 season garnering 100 billion views through live broadcasts and social content. The headline sponsor for the new season is Mercedes-Benz.

Each person attending the Shanghai spectacle was the winner of a 1-in-500 lottery. Producing the gathering took months of planning and TJ provided players with 100-page handbooks on virus prevention. When the clanging of digital swords wasn’t filling the air, Chinese rapper Lexie Liu and the League of Legends virtual K-Pop band rocked the stage in front of socially-distanced attendees. A 26-foot-tall dragon sculpture was lit up under the landmark Oriental Pearl TV Tower.

Broadcast rights for events like the one in Shanghai now bring in about 60% of TJ’s revenue, with the rest largely coming from sponsorship deals, said Lin, who also heads the China wing of Tencent-owned League of Legends maker Riot Games Inc. Much like Amazon.com’s Twitch, live streams of pro matches offer a revenue opportunity through virtual gift sales, and the goal is to also expand income from licensed merchandise, he added. Thinking along similar lines are e-commerce giants JD.com Inc. and Suning.com Co., both of which run teams competing in the LPL.

“We want to get closer to young people,” said JD Gaming manager Kong Lin. “JD has its roots in consumer electronics, so there’s a good synergy for us to do esports.”

Beijing has thus far shown a favorable attitude toward pro gaming, provided the games themselves have been approved and related content is free of excessive violence or political messaging. That’s allowed Tencent and its peers to explore multiple business avenues — including abroad.

In 2020, simultaneous viewership of the LPL outside China peaked at 310,000 on sites including YouTube and Twitch, which TJ intends to double before 2022’s end. Aiding that goal are the multi-language web shows it produces to capture the game’s memes and highlights, along with Tencent’s in-house streaming unit Trovo Live for the U.S. market. Much like real-world sports, all the action is visual and Tencent needs to only swap the commentary to localize League of Legends content.

Looking further ahead, TJ plans to organize the China league for other games in the same fantasy universe, Lin said. In February, the franchise’s mobile edition Wild Rift got the license for a commercial launch in China and the highly anticipated title recently became available for U.S. players to test. With most gaming now happening on mobile, that could prove to be the next big step in catalyzing interest and engagement.

“As a gamer myself, I’m always inspired when I see someone grow from a nobody to a big star,” Lin said. “I believe many fans love esports as a sport for that same reason.”