WALBRIDGE, Ohio – On the outskirts of Toledo, a short drive from Interstate 90, thousands of glass panels rumble along assembly lines at a factory that will help determine whether the Biden administration can meet two of its biggest goals – dramatically reducing carbon emissions and lessening reliance on China.

First Solar is one of the few U.S. solar-panel manufacturers in an industry dominated by Chinese factories, some of which the Biden administration has accused of employing forced labor. Lately, that has made First Solar particularly popular with panel buyers, which have snapped up the company’s entire production run through 2022.

Posters in the factory’s lobby proudly declare that the company is “countering China’s state-subsidized dominance of solar supply chains” while churning out products that are “uniquely American” and “Ohio-made.”

The question now: Can First Solar and its smaller counterparts in the U.S. solar industry crank up enough manufacturing capacity to meet the administration’s renewable energy goals or will U.S. power companies remain dependent on the massive Chinese solar industry, despite concerns about how it operates?

The technology offers a high-profile test of the United States’ ambition to re-shore manufacturing after years of losing ground to China’s low-cost and state-subsidized factories. Since 2004, U.S. production of the photovoltaic cells that form solar panels has fallen from 13% of global supply to less than 1%, while China’s share has soared from less than 1% to 67%, according to the National Renewable Energy Laboratory (NREL). 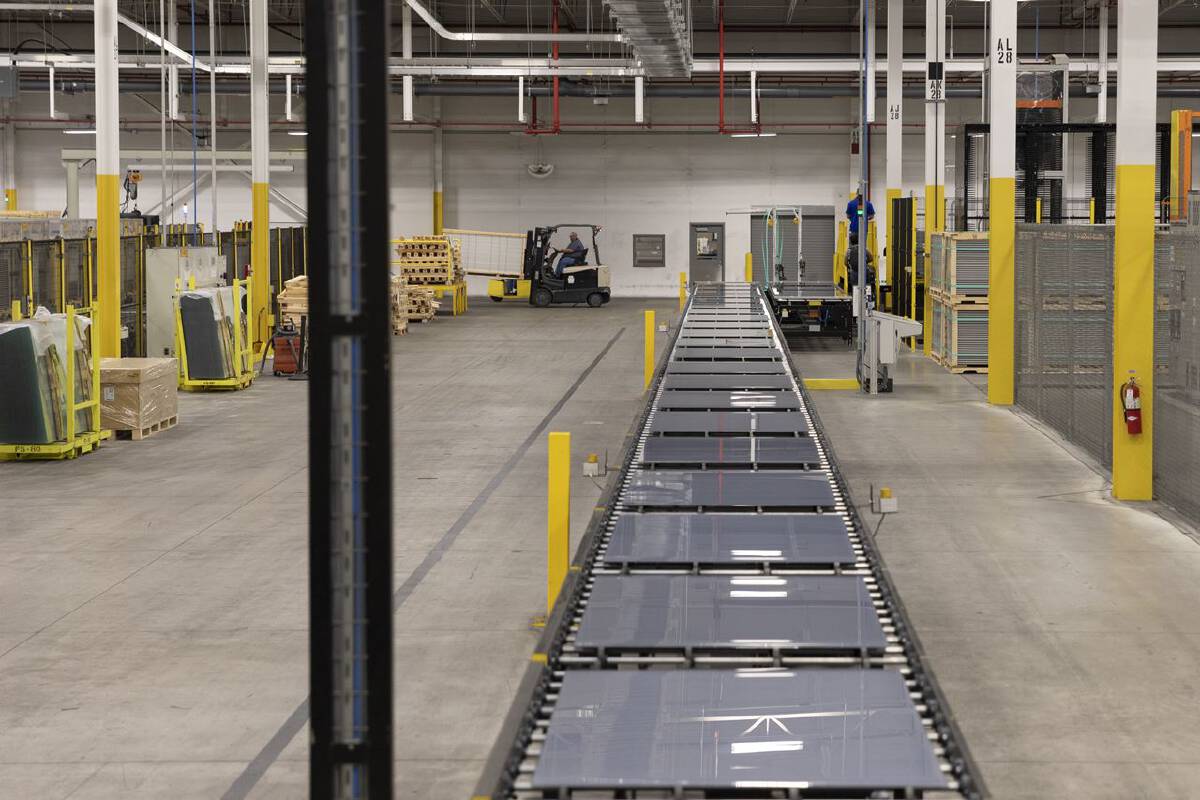 The Biden administration on Wednesday renewed its commitment to dramatically expand solar energy as part of its goal of eliminating carbon emissions from electricity production by 2035. Large investments could increase solar from 3% of electricity generation today to 45% within three decades, an Energy Department study concluded.

Solar is already the fastest-growing source of new electricity generation in the United States, with power companies relying mostly on panels made by Chinese companies. The Biden administration says the rate of deployment must triple or quadruple if the nation is to hit the 2035 decarbonization goal.

But those plans are now running up against another White House priority: promoting human rights.

Customs and Border Protection this summer began blocking the import of solar panels that it believed could contain materials from Hoshine Silicon, a Chinese company that it said appeared to be coercing workers from the persecuted Uyghur minority by threatening them or restricting their movement.

The Washington Post has reported that the company’s factories in China’s Xinjiang region have participated in state-sponsored programs that place Uyghurs in factory jobs – placements that human rights researchers say workers cannot refuse. Hoshine has declined to comment, and China has denied allegations about forced labor.

CBP officials have declined to say how many imports they may ultimately block, but Hoshine is the world’s largest manufacturer of a material used to produce silicon-based solar panels, making it a ubiquitous industry supplier.

First Solar, which last year supplied about 16% of panels deployed in the United States, is confident it can play a bigger role and is aiming to roughly double its global production capacity by 2023.

But doubling its global output to about 17 gigawatts worth of panels a year still won’t meet the current U.S. pace of solar-panel installation, which could exceed 20 gigawatts this year. And First Solar’s panels are designed for power-utility use, not for residential rooftops.

Solar energy experts say they believe the United States will continue importing panels from China but that the volume could fall as the federal government enforces its ban, and as some lawmakers push to cut Chinese-made panels out of federally funded energy projects.

Solar panels are made of semiconductor materials that convert sunlight into electricity. When light hits the panels, electrons in the semiconductor material break free of their atoms and form an electric current. Different panels produce different levels of power, ranging from about 300 watts to 600 watts per hour.

Chinese companies use silicon as their semiconductor and have built a vast supply chain to mine the material from quartz and turn it into panels.

Hefty state subsidies of Chinese solar companies helped drive many U.S. and European panel producers out of business a decade ago. First Solar, which grew out of a predecessor company founded in the 1990s by University of Toledo scientist Harold McMaster, was one of the few to hang on.

The company uses a different semiconductor compound called cadmium telluride, applying it to glass panels in an ultrathin layer using a method developed by McMaster and his university colleagues. First Solar produces the compound out of byproducts from the mining of copper and zinc.

On a recent afternoon at the Ohio factory, an endless line of glass panels traveled through machines that deposited layers of cadmium telluride and other materials.

The panels then rolled under lasers that carved grids into their surface, to create individual cells that would help channel electric current out of the panel.

The whole process takes about four hours, after which the panels are loaded onto trucks for mostly domestic delivery.

Just down the road, First Solar is spending $680 million to build a new factory that will be twice as big, bringing the company’s total output in the United States to over 6 gigawatts worth of panels a year. Labor Secretary Marty Walsh last month attended a groundbreaking ceremony for the factory, which the company said will create over 700 jobs.

“That’ll make this the largest integrated solar complex in the world outside of mainland China,” Mike Koralewski, the company’s head of manufacturing, said of the planned Toledo-area cluster, which also includes a third facility that served as the original manufacturing plant.

The rising cost of shipping panels from Asia has helped make U.S.-produced panels more affordable, compared with imports, Widmar said. So have import tariffs levied by the Obama and Trump administrations to protect domestic manufacturers from China’s state-subsidized solar industry.

Congress, meanwhile, has signaled it might offer further support for U.S. panel producers. An amendment incorporated into the $3.5 trillion budget resolution passed by the Senate last month would block Chinese components from federally funded renewable-energy projects. The Senate adopted the amendment by a vote of 90 to 9.

Solar-panel installers say they believe they’ll be able to document that some Chinese suppliers are free of forced labor, which should allow them to continue importing.

Chinese “manufacturers are going into overdrive to make sure they can get all the details . . . to show they are clean, completely, down to time cards for the quartz miners,” said John Berger, chief executive of Sunnova, a residential solar-energy company in Houston. “We are becoming increasingly confident we have no forced labor.”

The United States, he added, needs to figure out “how to solve the [forced-labor] problem and not create another massive problem that gets in the way of decarbonization and addressing climate change.”

The U.S. Solar Energy Industries Association, which represents panel installers and others, has developed a “traceability protocol” that it says will ensure its members aren’t buying components tied to forced labor. The group has tapped auditors with offices in China to monitor compliance.

But Laura T. Murphy, a professor of human rights and contemporary slavery at Sheffield Hallam University in the United Kingdom, who has reported on forced labor in China’s solar industry, expressed doubt that such audits would work, given that Chinese authorities have pressured domestic companies not to comply with them.

“Right now I don’t see how a company would feel confident that the information they are getting is providing certainty,” she said.

First Solar, she added, “is not going to be able to supply the entire world with solar panels. However, they do point to the fact that there are alternatives.”

The Clean Power Alliance, a nonprofit that buys renewable energy from power generators and sells it to households and businesses in Southern California, recently began requiring its electricity suppliers to sign contracts confirming that none of their components were made with forced labor.

“Besides being the right thing to do, it is also reducing our risk,” said Natasha Keefer, the group’s director of power, planning and procurement. “We want [solar-energy] projects to be able to secure panel supply . . . having components that are getting detained is not conducive to us reducing our risk and the developers don’t want that, either.”

Widmar said he has urged customers to take similar action.

“There is one customer, a utility here in the U.S., that made the decision to procure Chinese modules for a project we were bidding on,” Widmar said. “After we were made aware of that I personally made a call to the head of their renewable energy unit and we talked about it. I said ‘I want to be sure you understand the risks you may be taking.’

“My call made him go back to his team and after they did that . . . they made a decision to move that project over to us. This is becoming more and more of a concern, and people just don’t want to take the risk.”