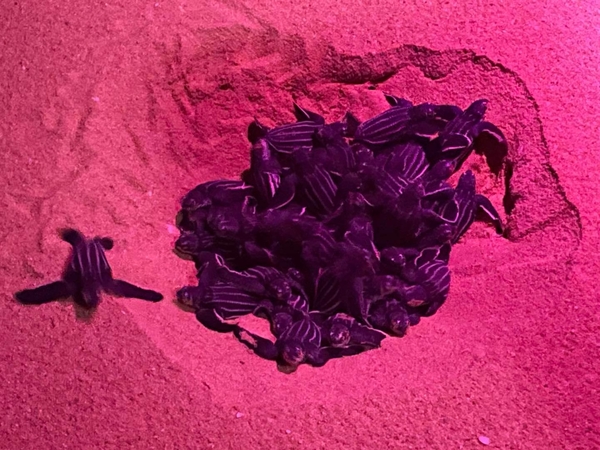 A record number of leatherback turtles have hatched in Phang Nga province as the endangered species makes a dramatic comeback on southern beaches.

“With the 305 baby turtles born earlier, we have now seen 383 leatherback hatchlings walk into the sea this season – higher than last season’s tally of 351,” he said. “This is also the highest number in the past 10 years, and it will keep growing until the season ends, as we have eggs in nine more nests waiting to hatch.”

The turtles’ egg-laying season lasts from October until March. Thon said pregnant turtles will lay eggs in a few more nests on the beach before this season ends.

Leatherbacks are protected under the Wild Animal Reservation and Protection Act, but egg-laying turtles had disappeared from Phang Nga’s beaches until six years ago.

The Department of Marine and Coastal Resources has taken measures to protect the turtles on the beach, erecting fences, monitoring nests with CCTV, and deploying patrols to ensure turtles are not disturbed.

“I want to thank everyone involved in this achievement, including the Natural Resources minister, the department chief, Phang Nga’s governor, department officials and volunteers, as well as everybody who kept the beach clean of plastic waste, which has helped bring the turtles back,” said Thon.

“This is undoubtedly the greatest marine achievement in Thailand that I have seen in my 30 years of working in the field.”

Bangkokian kills self with charcoal fire in parked car

A 40-year-old was found dead in his car parked under the Talat Phlu BTS station on Tuesday morning, and police suspect he may have died from smoke inhalation.

Police found a charcoal stove inside the car and the owner, Kritikorn Meemungkra, lying down with a framed photo of his family on his lap.

The first person to spot him was 54-year-old street sweeper Sitthisa Matmongkol. She said she had noticed the car a lot earlier, but did not think it unusual, until she spotted the burning stove inside. She said she tried to wake the person in the car, and after failing to do so she called the police.

The dead man’s wife, Tharida Wattanamongkol, 27, said her husband had tried to kill himself twice before, adding that he had self-abusive tendencies. He worked in a nightclub. Police are investigating his death.

In a Facebook post at the start of this year, BioThai Foundation listed statistics showing 5,086 people had killed themselves between October 2019 to September 2020. This means 7.75 out of every 100,000 people.

BioThai said the number of suicides over the past year was the highest in 18 years, and that the number rose during Thailand’s first lockdown.

Data shows that up to 54,000 people try to kill themselves in Thailand each year, and some 4,000 are successful in the attempt on their lives.

Data for 2020 demonstrates that the economic crisis triggered by Covid-19 was a key factor in suicides.

Suicides have been on the rise since 2017, with men accounting for the highest number of deaths.

The use of medical cannabis is a key government policy and the Drug and Narcotics Bureau under the Department of Medical Sciences is testing and developing health products from cannabis and hemp, said Supakit Sirilak, the department’s director.

The laboratory tests samples for strength and residues such as heavy metals, pesticides, mycotoxins, fungicides and contaminated microorganisms etc.

“Now the testing technique has been passed on to medical science centres nationwide for the analysis of vital substances and residues, and now they can develop laboratories outside the department’s jurisdiction. This will assure the quality and safety of cannabis products,” Supakit said.

The Cabinet on Tuesday approved reduction in social security contributions to Bt75 for two months.

Employers will still send their 3 per cent contribution to the Social Security Fund or up to Bt450 for three months (January – March).

Since the first Covid-19 patient was reported in China’s Wuhan city 391 days ago, the number of cases across the world hit 100 million on Monday.

Official statements from the Chinese government to the World Health Organisation (WHO) said that the first confirmed case had been diagnosed on December 8, 2019, followed by a cluster of pneumonia cases in Wuhan.

Then several countries, including Thailand, began announcing new cases and on January 30, WHO declared the novel coronavirus outbreak a public health emergency of international concern.

WHO then named this new disease caused by the novel coronavirus Covid-19. It said this name was chosen to avoid inaccuracy and stigma, which is why it did not refer to a geographical location, an animal, an individual or group of people.

A Samut Sakhon Health official on Monday reported a sharp spike in new Covid-19 cases with more than 900 people in the province testing positive. Meanwhile, Bangkok has the second-most number of cases, but the number of red zones marking high risk is down to three districts.

The record-high numbers came after aggressive search in large industrial plants with more than 1,000 employees. Results of 5,217 laboratory tests were released on Monday.

A total of 3,018 infected people were in treatment, 467 patients — 232 Thais and 235 foreigners — were in hospitals. Meanwhile, 2,551 foreigners were in quarantine facilities.

Officials conducted 5,574 additional proactive searches in the community on Monday, with an additional 5,217 laboratory test results revealed. The number of proactive searches since Covid-19 was found in the central shrimp market on December 17, 2020, totals 70,468; 5,178 cases are positive — 484 Thais and 4,694 foreigners.

Bangkok saw the most infection from three districts.

The Bangkok Metropolitan Administration (BMA) reported Covid-19 cases in each district of Bangkok and found three districts with the highest accumulated infections were Bang Khun Thian district, 148, Chom Thong, 35, and Bang Phlat, 32. At the same time, Saphan Sung and Samphanthawong were still clear of any infection.

Samut Sakhon is considering reopening its main shrimp market in Muang district despite a spike in new Covid-19 cases in the province on Monday.

The market had been ordered shut since December 20 after more than 500 confirmed cases were tracked back to it.

“After over a month of shutdown, the province has tested some 1,217 merchants and people residing nearby,” deputy governor Theerapat Katchamat said. “In the latest round, 113 tested positive and were immediately separated and moved to the field hospital for treatment, which means the market and its surrounding areas should now be virus free.”

Provincial authorities hope to reopen the market by Wednesday after a major clean-up operation on Monday in a bid to revive the province’s economy, which is mostly reliant on the seafood industry.

“The market will not open until we are sure all preventive measures are in place and merchants and visitors can strictly adhere to them, including social-distancing. The selling areas have also been modified to reduce crowds,” Theerapat said.

“As for fears that the 1,104 people who tested negative could be asymptomatic, it is highly unlikely as they have been quarantined for over a month, which is beyond the virus’ incubation period.”

The deputy governor also put the spike in new cases on Monday down to aggressive testing of as many as 10,000 individuals daily, especially in large factories. Monday saw 914 confirmed cases.

“Most of the infected are migrant workers in factories, and we have prepared facilities to quarantine them near their workplaces to limit the chance of the virus spreading to other communities,” said Theerapat.

With the 914 cases on Monday, the total number of new cases in Samut Sakhon has soared to 6,555, 1,218 of whom have been treated and discharged, while two have succumbed to the infection.

The Centre for Covid-19 Situation Administration (CCSA) on Tuesday reported 959 new cases, the highest number on a single day since the outbreak last year, including 22 people who had travelled from abroad.

Of the new cases, 89 were exposed to the virus while visiting high-risk areas. The province with the highest number of infections is Samut Sakhon (70), followed by Bangkok (17), Samut Songkham (1), and Ubon Ratchathani (1).

Proactive testing led to the discovery of 848 cases — 760 foreigners and 84 Thais — in Samut Sakhon, and four Thais in Bangkok.

Of the returnees, 13 are Thai nationals, returning from the United Kingdom (5), United States (3), Myanmar (3) and Denmark(1). Also testing positive were two Indians, two Sudanese, a Chinese, an Indonesian, a Pakistani, a Briton, a Russian and a Nepali who flew in from their respective nations.

Meanwhile, 119 patients have recovered and been discharged.

As of Tuesday, the number of confirmed cases in Thailand had risen to 14,646. Of these, 12,250 contracted the virus domestically, including 5,532 who were found via proactive testing, and 2,396 are returnees. So far, 10,892 have recovered and been discharged, 3,679 patients are still in hospital and the death toll is 75.

Taweesin Visanuyothin, the CCSA spokesperson, revealed that the number of cases in the second wave since December 16 had reached 10,409, after 10 months under the emergency decree.

In the second outbreak, patients had an average age of 34. The age range with most cases is around 20-29 years old (58 per cent) followed by 30-39 years old (29 per cent). Women tended to get infected more often than men with a ratio of 1.36 female patients to 1 male.

Readings for particulate matter less than 2.5 micrometres in diameter (PM2.5) in different regions:

However, the air quality in Bangkok and its vicinity is termed moderate to very good with PM2.5 readings at 15 to 43μg/m3.

People in areas where PM2.5 pollution is bad have been advised to monitor their health and reduce time spent on outdoor activities, especially the elderly, children, and patients with respiratory diseases.

Nonthaburi Governor Sujin Chaichumsak on Monday signed an order allowing six businesses to reopen after they had been previously ordered to shut in a bid to control the Covid-19 outbreak.

Businesses that are allowed to open must strictly follow disease prevention measures announced by the Ministry of Public Health.

Several businesses in the province, including schools and universities, boxing and cockfight rings, theatres, massage palours, swimming pools and karaoke joints, were ordered to close since January 5 after a new wave of Covid-19 outbreak was reported in Thailand.